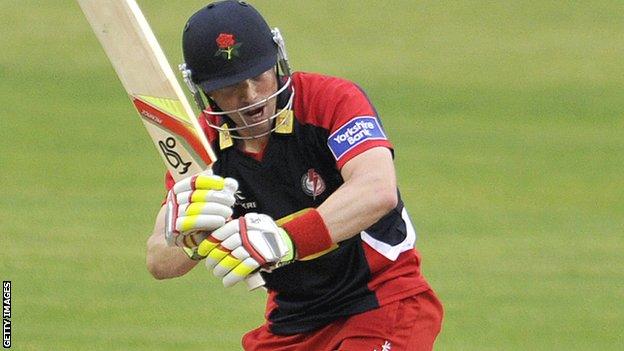 Lancashire made a good start as Moore and Ashwell Prince (32) put on 77, while Simon Katich (43 not out) smashed three sixes in their 165-3.

Mark Stoneman (33) and Phil Mustard (19) shared a first-wicket partnership of 53 from 33 balls in reply.

Durham youngsters Max Morley, Mark Wood and Ryan Pringle made their Twenty20 debuts and it was the latter who slightly put the brakes on Lancashire after their impressive start.

Spinner Pringle, 21, who is yet to play a first-class game, took 2-24 to get rid of Prince, who holed out to Gordon Muchall, and Steven Croft.

Moore and Katich then upped the rate again with 68 from 43 balls to push Lancashire to a competitive total.

Stoneman and Mustard fell in successive balls after pushing Durham past 50 - at which point they began to lose their way.

New Zealand international McClenaghan then took two wickets in two balls to rip the heart out of the home side's innings and, despite 34 and three sixes from Ben Stokes, Lancashire secured their 11th Twenty20 victory over Durham.