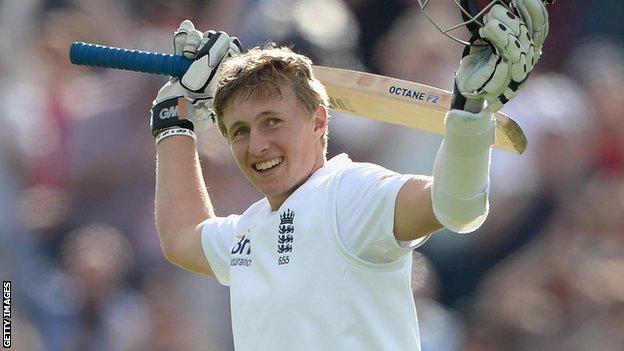 Joe Root has the qualities to open the batting for England, says Yorkshire director of cricket Martyn Moxon.

Root, 22, opens for the Tykes and moves up the order to do likewise for England in their Ashes warm-up against Essex on Sunday as he replaces Nick Compton.

"It will be different against the new ball," Moxon told BBC Radio 5 live.

"But it's not as if he's been thrust in without any experience of batting at the top of the order. I'm sure he'll handle it fine."

Moxon, 53, opened the batting for Yorkshire during his playing days and also made 10 Test appearances for England.

Root averages 42.40 from his six Test matches, in which he has been used as a middle-order batsman, and 49.16 from 16 one-day internationals.

"He's a very mature lad for his age and he's handled everything so far in his international career," said Moxon.

The Ashes series between England and Australia starts at Trent Bridge on 10 July and the tourists replaced coach Mickey Arthur with Darren Lehmann on Monday, citing "struggles on and off the field".

Lehmann played 88 County Championship games for Yorkshire, and Moxon said: "He's a laid-back character but very serious about his cricket.

"He's got a nice balance between being relaxed but focused, and that's the kind of environment he'll try to create with Australia.

"I think he'll galvanise them, he's the kind of character that will. I think England will still win the Ashes, but I think it'll be more difficult now Darren's in charge.

"He speaks his mind, without a doubt. If there's something wrong or something needs saying, he won't hold back.

"He's a colourful character, he likes a beer and a cigarette - he's not a staid kind of coach. He's going to be a great asset to Australia cricket."