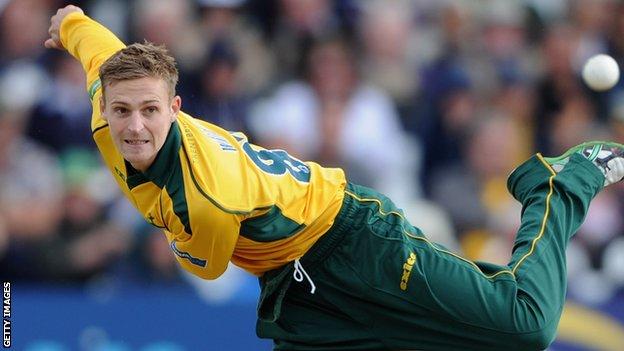 The left-arm spinner, on a month-long loan from Nottinghamshire, took 4-14 and helped restrict the Gladiators to just 83-9 as they chased 125 to win.

In a rain-reduced match of 12 overs each, big-hitting Richard Levi was out for just one for Northants.

When play eventually got underway at 20:10 BST, the home fans were hoping to see some fireworks from South African Levi, who holds the world record for the quickest international Twenty20 century off just 45 balls, but were left disappointed when he edged behind off Dan Christian.

Coetzer and Cameron White (28) both scored quickly in a partnership of 44 off 30 balls, before Northants captain Wakely blasted two sixes and two fours in his innings of only 19 balls.

Gloucestershire lost Hamish Marshall to the second ball of their reply and the innings then stuttered as only Michael Klinger (27) passed 20, while Mohammad Azharullah took 3-23.