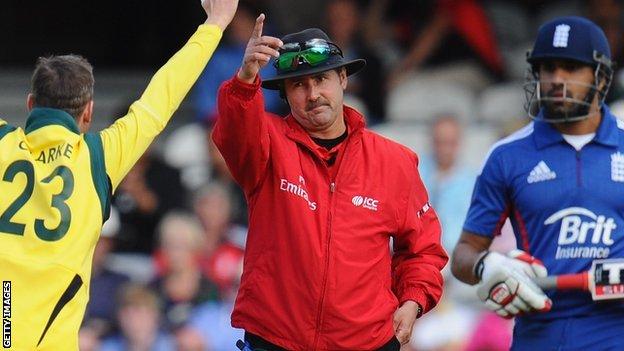 Former England left-arm spinner Richard Illingworth has been promoted to the International Cricket Council's elite panel of 12 umpires for 2013-14.

Illingworth, 49, played for Derbyshire and Worcestershire before becoming a first-class umpire for the 2006 season.

The ICC said selection was based solely on overall performance.

"In Asad's case, it is important to emphasise that the recent speculation linking his name to the IPL spot-fixing investigation was not considered during the selectors' deliberations," Geoff Allardice, the chairman of ICC umpire selection panel, said.

"It is exciting to see Richard and Paul promoted to the elite panel, but it is also important to acknowledge and appreciate the outstanding contributions of Asad and Billy over a long period of time."

Rauf was included in the panel of umpires in 2006 and officiated in 47 Tests, 98 one-day internationals and 23 Twenty20 internationals.

He was withdrawn by the ICC from officiating in the Champions Trophy in England following media reports that he was under investigation by Mumbai Police.

Bradford-born Illingworth played nine Tests and 25 ODIs for England, featuring in the side that reached the 1992 World Cup final.

He has been officiating at international level since July 2010 and has umpired in four Tests, 16 ODIs and seven T20Is.

Illingworth made his first-class debut for Worcestershire in 1982 and joined Derbyshire 18 years later where he played his final county game in 2001.

Reiffel began umpiring in international cricket in January 2009 and has stood in four Tests, 30 ODIs and nine T20Is.