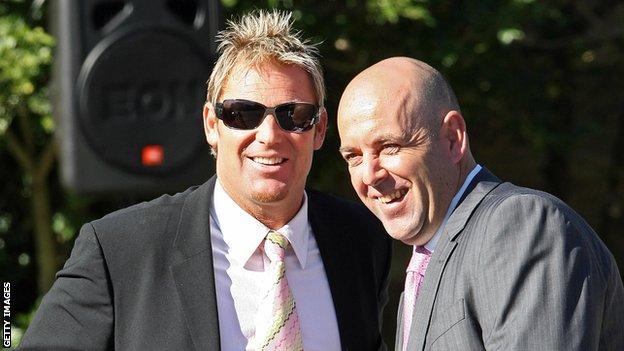 Darren Lehmann's appointment as Australia coach should give England cause for concern, according to Ashes-winning bowler Matthew Hoggard.

Lehmann, 43, replaced the sacked Mickey Arthur ahead of the Ashes series, which begins on 10 July at Trent Bridge.

Hoggard played alongside Lehmann, who would "love" former team-mate Shane Warne to help him out, for Yorkshire.

"He will install the true Aussie grit and determination in that Australian dressing room," said Hoggard, 36.

"Darren will get the passion going. I think it is worrying times for England."

Hoggard took 248 Test wickets in his England career and played alongside Lehmann for Yorkshire between 1997 and 2006.

Now at Leicestershire, he was a member of the victorious 2005 Ashes squad, taking 16 wickets as Michael Vaughan's men beat Australia for the first time since 1987.

England have won two of the three Ashes series since.

They face an Australia side coming off the back of a 4-0 whitewash in India, on a tour that saw four players dropped for disciplinary reasons, and a poor showing in the Champions Trophy.

And in an attempt to find a winning formula, Lehmann is considering asking legendary former Australia spinner Warne for help.

Lehmann won the Ashes twice as a player with Warne and spent four years alongside him in the Victoria dressing room.

"We would love him in the dressing room. The past legends is what we are about," said Lehmann.

"You don't have a guy take 700 Test wickets and not use him if he is around the place.

"He is always welcome, as is anyone who has represented Australia, in our dressing room. I will be after the past players to use their knowledge and guidance along the way.

"If Warne is around, and I know he is commentating all the time, then we will certainly use him."