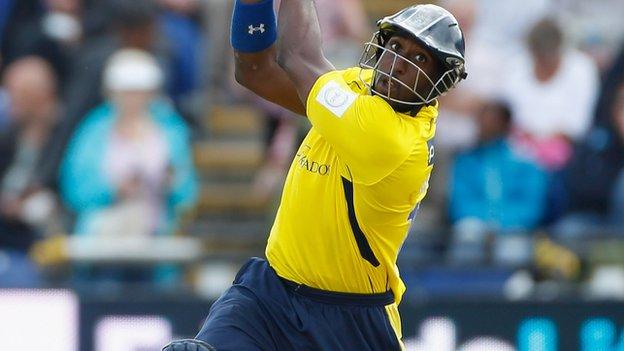 Hampshire began the defence of their FL t20 title with a five-wicket victory over Surrey at the Ageas Bowl.

Hampshire opener Michael Carberry struck 60 off 49 balls as the hosts always looked favourites chasing down what proved to be a modest total.

Neil McKenzie (37 not out) guided the Royals home with four balls to spare.

Surrey, who finished bottom of the South Group last season, got off to a solid start in the 2013 curtain-raiser, with Rory Burns (27) and Jason Roy (11) compiling a first-wicket stand of 31 before the latter was bowled by David Griffiths (2-23).

Burns and Vikram Solanki then combined to add a further 33 runs but Danny Briggs, playing despite his inclusion in England's Twenty20 squad for the series against New Zealand, bowled both batsmen in the space of one over as the hosts launched a fightback.

Big-hitting Australian Glenn Maxwell (15) top-edged to Royals captain Neil McKenzie at backward point and Azhar Mahmood holed out to long on soon after, and only a 49-run partnership between Wilson and Zafar Ansari (25) helped Surrey towards a total that might be competitive.

In reply, the opening pair shared 32 before Mahmood dismissed James Vince for eight and Jimmy Adams looked well set on 17 only to be superbly run out by Roy, leaving the score on 67-2 after 8.3 overs.

But where Surrey had collapsed at the same point in their innings, Carberry pressed on and his impressive 60, which included eight fours and one six, gave Hampshire the platform they required for victory.

Carberry was surprisingly trapped lbw by Zander de Bruyn (3-14), who also caught and bowled Sean Ervine for six and then saw off Liam Dawson in his next over, as the Royals suffered a slight wobble late on.

But McKenzie and Adam Wheater saw them home, with Wheater's six over cow corner completing the victory.