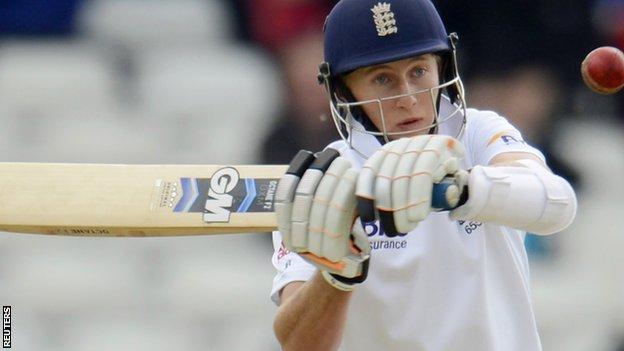 Nick Compton has been left out of England's warm-up match for the Ashes against Essex, with Joe Root moving up the order to open the batting.

Compton, 29, struggled in the recent 2-0 Test series win over New Zealand and appears to have paid the price.

"We believe Joe Root is currently the best opening partner for Alastair Cook and he will open against Essex," said national selector Geoff Miller.

The first Test between England and Australia begins on 10 July.

Opening batsman Compton scored 39 runs in his four outings in the two Tests against New Zealand in England in May and was told by coach Andy Flower he needed to go back to Somerset and get back into form.

He has scored 166, 18, 15 and 56 in his last four county appearances but has failed to work his way back into the international fold.

Compton can push for a recall when Somerset play Australia, who start their Ashes preparations at Taunton on Wednesday, but Root also has the chance to stake his claim against Essex from Sunday at Chelmsford.

Root, 22, has impressed since breaking into the England set-up but has been used as a middle order batsman, despite opening for Yorkshire.

He scored a maiden Test century with a score of 104 in the second Test victory over the Kiwis, batting at five, while also helping England to the final of the Champions Trophy in the 50 over format of the game.

"Joe has performed well for Yorkshire at the top of the order earlier this season and during his international career so far has proven to be very adaptable in all three formats and relished the challenge of international cricket," said Miller.

"Ever since he was about 15, we at Yorkshire felt we had a good player in Joe Root and that he had what it takes to be pretty special. He has good touch, good footwork and plays the ball late."

Pietersen has not played for England since being sidelined with a knee injury in March but the 32-year-old scored a century on his return to action for Surrey last week.

Swann, 34, missed the latter part of England's Champions Trophy campaign with a calf problem and will be aiming to prove his fitness, while Rankin and Onions have been added to the squad from the Test series against New Zealand.

"This match is a vital part of our preparations for the Ashes after a period of limited-overs cricket for a large number of the squad," said Miller.

"We have a very exciting two months of Test cricket coming up and it is important that we start well at Chelmsford next week. Kevin Pietersen has had no complications following his recent return to cricket after a knee injury which is pleasing and Graeme Swann is recovering well from a calf injury."