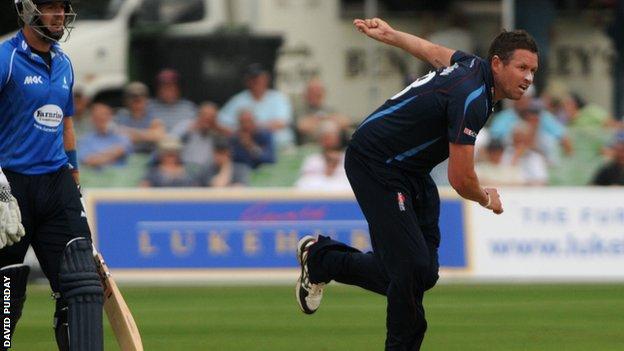 Seamer Mitchell Claydon believes that Kent will take momentum from their last two matches against Sussex and New Zealand into their Twenty20 campaign.

Last week, the Spitfires beat Sussex Sharks in the YB40 before losing a T20 tour match to the Black Caps.

"T20 is all about momentum and we can take away a lot from Sussex," he told BBC Radio Kent.

"If we can build on that momentum and get the snowball rolling, the confidence goes through the roof."

He added: "All of a sudden you start winning games when you shouldn't and you believe you can win.

"There are a lot of positives that have come out of the New Zealand game and the last week's cricket for Kent."

The Australian-born Claydon has impressed since joining on a month-long loan spell from Durham, taking 5-31 against New Zealand on Saturday, including the prized scalps of Brendon McCullum and Martin Guptill.

Despite having been with the squad for a fortnight, he has already been impressed by his new team-mates and believes there is a good balance to the squad.

"There are some very good players here," he continued. "In a T20 side you need that youth with also a bit of experience.

"We've got Rob Key to come back, Mark Davies, Nashy [Brendon Nash] and a few other lads too.

"I think with them and the young lads we've got to come back we'll go pretty well."

Kent Spitfires open their 2013 FLt20 campaign against the Middlesex Panthers on Friday at Canterbury.