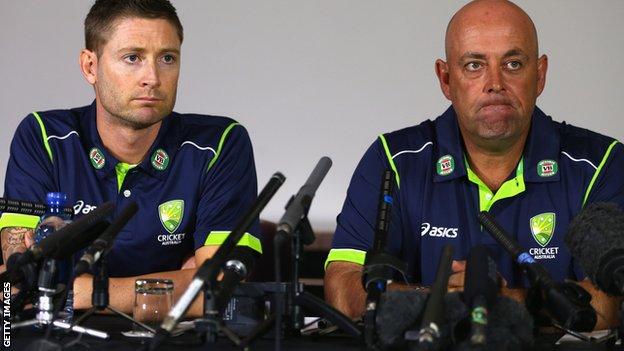 Darren Lehmann has been appointed Australia coach after 16 days before the Ashes starts.

Cricket Australia said Arthur, in charge for two years, was dismissed due to "struggles on and off the field".

Cricket Australia CEO James Sutherland said: "This has been a difficult decision to make but one that we feel is necessary."

The 43-year-old retired from playing for South Australia in 2007, and was appointed as coach of Queensland in May 2011. He also recently coached Kings XI Punjab in the Indian Premier League.

Lehmann said: "It's a challenge for all of the playing group. I'm excited by the challenge, looking forward to working with captain Michael Clarke and the team, and seeing them enjoy some success on this tour."

Cricket Australia said he was the "outstanding candidate to drive the cultural change required" to take the team to the "number one ranking in all formats of the game".

They added that the decision as "drastic", but necessary "with such a big series fast approaching".

Sutherland said: "The timing is far from ideal but we didn't feel we could sit back and hope matters would change without addressing issues critical to a high-performing team culture.

"Recent on-field results have been too inconsistent.

"Discipline, consistency of behaviour and accountability for performance are all key ingredients that need to improve. We see that the head coach is ultimately responsible for that."

Lehmann played for Yorkshire between 1997 to 2006, was part of the side that won the County Championship in 2001, and captained the county the following season.

2003: Takes catch for Australia to retain the World Cup

2008: Ends playing career after spell with Rajasthan Royals in the IPL

2012: Coaches Queensland to Sheffield Shield in first season in charge of the state

On Lehmann, Sutherland added: "No-one is underestimating the task at hand but we believe he is the right man for the job. It is up to the players to respond under his leadership and demonstrate their commitment to a successful Australian team."

Then, in May, opening batsman David Warner was fined £3,700 (AU $5,750) for posting abusive comments to journalists on his Twitter account.

He was later suspended until the first Ashes Test, and fined £7,000 (AU $11,500), for punching England's Joe Root in a bar following Australia's defeat to England in the Champions Trophy.

Cricket Australia also announced that Clarke had stood down from his role as on the team's selection panel.

"Being a team selector was proving to be a significant drain on Michael's time and he sees this as distracting from his primary responsibilities as a player and as captain," added Sutherland.