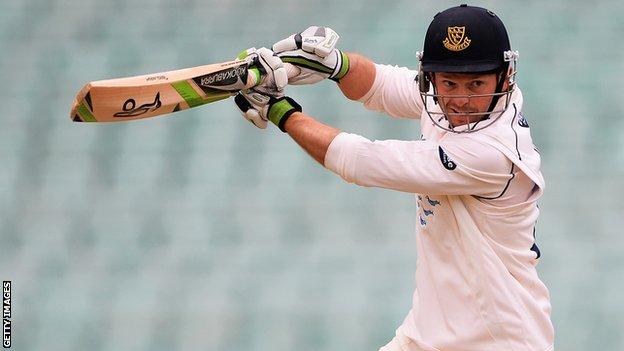 Ed Joyce blasted 204 not out as Sussex dominated Nottinghamshire on the third day at Trent Bridge.

Earlier in the day, Joyce's unbeaten 204, which included 24 fours and three sixes and came off only 239 deliveries, was the highlight of the visitors' mammoth innings which was compiled in just 110 overs and secured maximum batting points with room to spare.

Having got off to a positive start, the Notts openers would have been hoping to emulate Joyce and Hamilton-Brown but Jordan had Wessels caught by Panesar and then clean bowled Mullaney with both batsmen looking well set.

Samit Patel and David Hussey then fell cheaply and, despite Taylor's 91-run fifth-wicket partnership with Chris Read (45), Panesar's late effort has given Sussex a hope of victory on the final day.

"Notts have been left with work to do to save this contest yet there will be grumbles of discontent if they fail to avoid the follow-on and lose 14 wickets on the final day.

"James Taylor looked in excellent touch again, reaching stumps on 81 not out.

"How England continue to overlook him is beyond me, so we'll enjoy seeing him in a Notts shirt for as long as we can before the inevitable call arrives."

"Sussex hold the advantage after three days at Trent Bridge, but the odds are stacked in favour of a draw on a good wicket.

"Chris Jordan starred with the ball for Sussex taking the first Nottinghamshire wickets to fall. He was ably assisted by Monty Panesar who bowled unchanged from mid-afternoon.

"The hosts will begin the final day on 223-6, 283 runs behind after Sussex declared on 506-5. However, it will be a big surprise if Sussex can take 14 wickets and force victory on the final day."