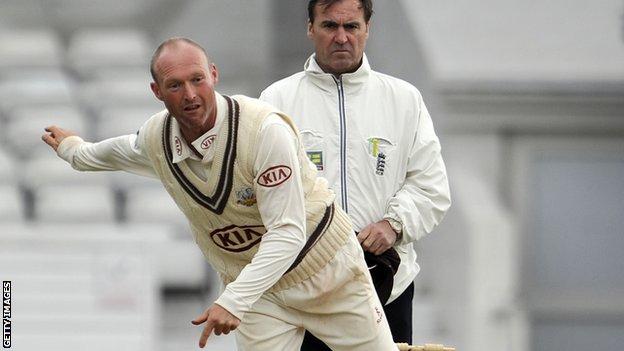 Veteran spinner Gary Keedy was the star of the final day, taking 7-99 as Surrey and leaders Yorkshire played out a draw at Headingley.

The 38-year-old slow left-armer returned his best figures since 2010 as the home side were bowled out for 254.

Liam Plunkett followed his first-innings 51 by top-scoring with 68 before becoming Keedy's final victim.

Surrey batted again 335 behind, but only faced two overs before the two captains called the match off.

Yorkshire's eight points extended their lead at the top to 16.5 points, though Sussex could overhaul them if they win their game against Notts, which ends on Tuesday, and there was further good news when head coach Jason Gillespie ruled out any chance of him joining Australia's new-look coaching set-up under Darren Lehmann.

A draw seemed inevitable when they resumed on the final morning on 52-1, 132 runs ahead, but Adam Lyth (32) played on to Keedy, who then removed skipper Andrew Gale and debutant Jack Leaning for ducks in the same over to start a few alarm bells ringing in the home dressing room.

However, Surrey needed a rapid collapse to have a chance of forcing a win and they were held up as first Rashid and Andrew Hodd put on 46, and then Plunkett supervised the addition of 45 for the final two wickets.

Steve Patterson showed particular gallantry in keeping Plunkett company for 17 overs despite going out to bat with a fractured big toe on his left foot.

"Both sides had to settle for a draw at Headingley because Yorkshire were reluctant to set up a game as they were under-strength in the bowling department, with injuries during this fixture to Steve Patterson and Ryan Sidebottom.

"Another bowler created the headlines, however, with veteran spinner Gary Keedy taking 7-99 as Yorkshire were dismissed for 254 in their second innings.

"Surrey are still without a win, but this was a fine performance. Yorkshire, meanwhile, remain top of the Championship with seven games left."