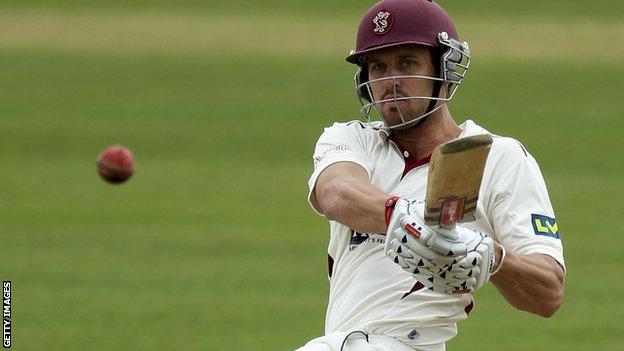 England opener Nick Compton's half century led Somerset to a four-wicket win over Derbyshire, who collapsed to 94 all out on the final day.

Chasing 145, Compton (56) and Marcus Trescothick (21) shared 60 before the latter fell to Jonathan Clare.

The seamer took 5-29 as Somerset slumped to 109-5, but Peter Trego and Craig Meschede finished the job.

The win lifted Somerset up two places to sixth in the Division One table, with Derbyshire remaining at the bottom.

Clare saw off the visitors' top five in quick succession following Compton's opening stand with Trescothick, but Trego (16) and Meschede took Somerset over the line as they recorded their first Championship victory of the season.

Heading into the final day, a draw had looked the most likely result, but Shiv Chanderpaul was caught by James Hildreth off the bowling of Alfonso Thomas in the third over of the morning and his dismissal set the tone.

Only Wes Durston, with 20, provided any kind of resistance and when he was last man out, bowled by Jamie Overton, the task looked a relatively straightforward one for Somerset.

Compton, not renowned for his aggressive strokeplay, struck a six in Mark Footitt's second over as he and Trescothick started positively.

But Trescothick's dismissal sparked a Somerset wobble and Clare, making his first Championship appearance since 15 May, saw off David Elgar, James Hildreth, Craig Kieswetter and Compton before Meschede hit the winning run.