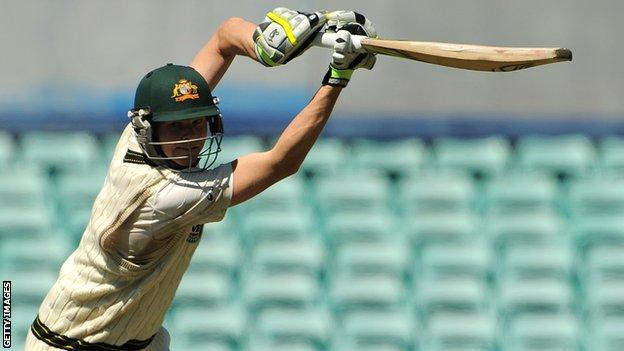 Steve Smith has been drafted into Australia's Ashes squad amid concerns over captain Michael Clarke's fitness.

Smith has been called up as cover until at least the second Test at Lord's, which starts on 18 July.

The 24-year-old all-rounder will meet up with the original 16-man squad on Monday ahead of Australia's official tour opener against Somerset this week.

The move comes after Clarke's long-standing back problem flared up again shortly after arriving in England.

Clarke could still make his first appearance of the tour in the four-day game at Taunton this week, but with David Warner suspended until the first Test - after a bar-room altercation with England batsman Joe Root earlier this month - Smith's inclusion has been deemed necessary.

The right-hand batsman, who is also a useful leg spinner, is already in England after captaining Australia A during their three-match tour, which culminated in a 24-run win over Gloucestershire in Bristol on Sunday.

Australia chief selector John Inverarity said: "Given David Warner is unavailable for the upcoming tour games against Somerset and Worcestershire and while Michael Clarke continues to make good progress from a back injury, we feel further batting cover is required.

"Steve Smith has been added to the Australian Ashes squad until the beginning of the second Test, when it will be reviewed."

Pakistan-born leg-spinner Fawad Ahmed had also been tipped for a late call-up but will now return to Australia on Monday to complete his citizenship qualification.