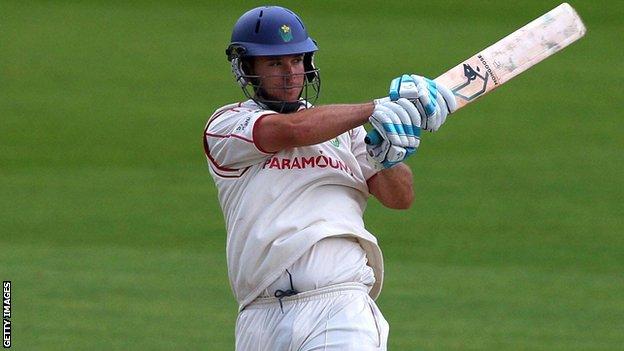 Glamorgan chief Matthew Mott says he will review his side's batting unit after a disappointing start to the new campaign.

The Welsh county have won only one of their opening eight games in the County Championship Division Two this season.

Mott is in the final year of his contract as head of elite performance.

"The batting unit hasn't fired for a while now," he said after his side's eight-wicket loss to Worcestershire. "It's important we get that right.

Our batting unit needs to improve. We are eight games into the season now and it's important we take stock because we have a couple of weeks off now before our next championship match.

"Eight games in is time when you take stock. We have backed this unit so far and we are not in a rush to make wholesale changes, but it's certainly under a big review at the moment.

"We still have a big chance of going up, but we are going to have to win five games out of the remaining eight."

Worcestershire cruised to an eight-wicket victory over Glamorgan to earn a third championship win this season. Glamorgan have drawn four of their eight Championship games in the opening half of the campaign.

Glamorgan are seventh in Division Two and Mott did not hide his frustration at his side's poor return from the opening weeks of the Championship season.

"It is well below what we were aiming for and we can make excuses as much as we like, but we have been in positions to win games," said Mott.

"We certainly wanted three wins going into the halfway stage. It is something we are going to have to look at."

While Mott admitted his dissatisfaction at his batsmen's performance, he did praise the contribution of Jim Allenby.

Aussie Allenby batted superbly to marshal Glamorgan's lower order at New Road as the final three wickets added 149, but his efforts were not enough to earn victory for Glamorgan.

"Unfortunately we have relied too heavily on Jim in too many of our matches," said Mott.

"Our batting unit needs to improve. We are eight games into the season now and it's important we take stock because we have a couple of weeks off now before our next championship match.

"Our guys need as a batting unit to really step up and get those 350-plus scores that really give our bowlers the chance to take 20 wickets."