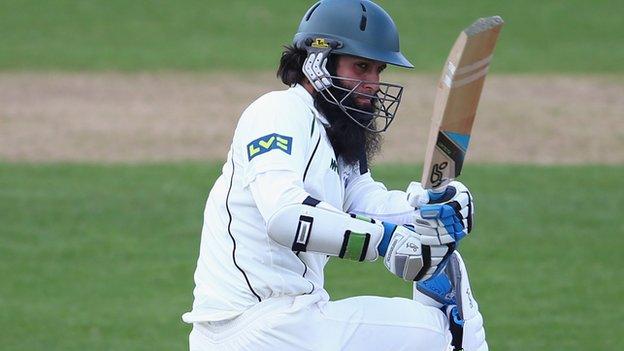 Worcestershire cruised to an eight-wicket victory over Glamorgan to earn a third championship win this season.

Glamorgan showed some resistance, adding 78 runs to their overnight total of 200-7 to make the hosts bat again.

Jim Allenby (74no), Mark Wallace (43) and Michael Hogan (37) battled but the hosts' main concern was the rain and not the meagre victory target of 51.

Glamorgan's hopes of avoiding a heavy defeat were slim after a miserable third day.

At the start of play they still trailed by 28 runs with just three wickets remaining after being forced to follow on.

Allenby batted superbly to marshal the lower order and the final three wickets eventually added 149, but their efforts just delayed the inevitable.

Last man Reed made only four but he hung around for 37 balls before edging a delivery from Chris Russell to wicketkeeper Ben Cox.

In reply, Worcestershire captain Daryl Mitchell hit four fours in his 22 before he was caught at second slip off the bowling of Mike Reed, and Matt Pardoe tamely drove Marcus North's first delivery to mid-on.

But Moeen Ali hit the winning runs to take his total to 908 runs for the season, the highest total in the country.

Worcestershire are now unbeaten in four matches at New Road and the win puts them in promotion contention as the main rivals to the top two, Northants and Lancashire.