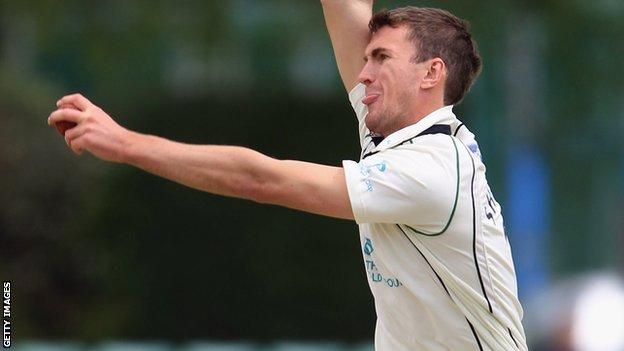 Ben Wright's 63 was a rare bright spot for Glamorgan, along with Jim Allenby's half century (53no).

The hosts declared on 505-7 on day two and the Welsh side still trail by 28 runs and face a struggle to avoid an innings defeat.

Allenby and Mark Wallace, who showed resistance on Friday evening, added a further 48 in Saturday's morning session before Allenby fell for 82, caught off Joseph Leach.

Wallace saw Cosker (four) and Owen (five) come and go in quick succession before succumbing to Jack Shantry on 43.

Michael Hogan put up a strong late show of 37, but after the tail was disposed of, the visitors were forced to return for a second innings.

And, regardless of the promising knocks from Wright and Allenby, who remains at the crease with Will Owen (34no), Glamorgan look certain for defeat with William Bragg, Stewart Walters, Marcus North and Murray Goodwin all failing to reach double figures.

Shantry, who went on to remove Wallace and Cosker, ended the day with match figures of 8-132.