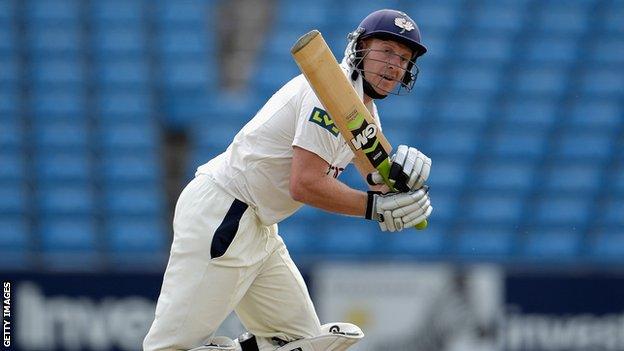 Yorkshire were frustrated by the weather as they put themselves in a strong position against Surrey.

Almost 40 overs were lost to rain as Yorkshire declared on 433-9 before the visitors moved to 53-1 at the close.

Captain Andrew Gale was eventually out for 148 as he shared a partnership of 81 with Liam Plunkett (51).

Jack Brooks removed Arun Harinath for 36 in the penultimate over of the day as Kevin Pietersen was left waiting for his first bat of the season.

Resuming on 292-5, Yorkshire lost a wicket in the eighth over of the day when Andy Hodd edged Tim Linley to Rory Burns at third slip for nine.

After a heavy shower forced an early lunch to be taken at 12:30 BST, Gale was given a life on 121 when he was dropped at second slip by Vikram Solanki off Chris Tremlett.

But he eventually fell two short of his 150 when he was bowled attempting to drive Gary Keedy.

Plunkett played a number of commanding strokes, including three boundaries off one Tremlett over as he made his first half century of the season, before Jon Lewis had him caught behind.

Ryan Sidebottom (26) then struck some lusty blows at the end of the innings before the declaration came.

After another rain delay, Surrey's openers started confidently to move to 51 without loss before Harinath edged to the wicket-keeper off Brooks.

"Rain and bad light were prominent features on the second day at Headingley but the cricket we did have was fascinating. Yorkshire declared on 433-9 with Andrew Gale finally being dismissed for an excellent 148 and Liam Plunkett making a breezy 51.

"Arun Harinath and Rory Burns played very well in reply facing a tricky 18 overs until stumps. But with two overs to go Jack Brooks had Harinath caught behind for 36.

"It still looks an excellent surface at Headingley and Surrey will look to bat positively tomorrow and a certain Kevin Pietersen will be hoping to have a long stay in the middle."