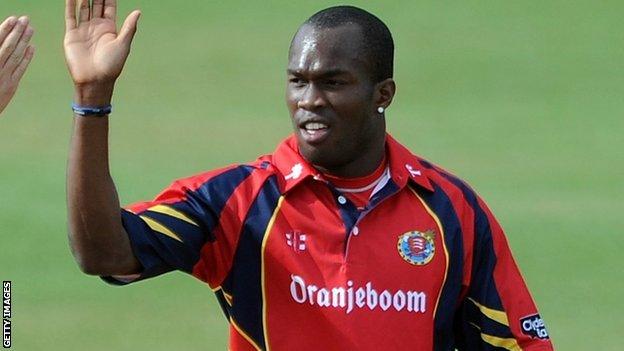 Essex head coach Paul Grayson has said bowler Maurice Chambers has to take responsibility for his development to get his career back on track.

The 25-year-old was touted as a promising talent when he made his first-class debut in 2005.

"He's at that age where you need to see performances," Grayson told BBC Essex.

"Unfortunately Maurice has not been consistent enough. It frustrates us, because we keep scratching our heads with Maurice."

Jamaica-born seamer Chambers had his most promising season in 2010, taking 38 County Championship wickets at an average of 23.92, earning an England Lions call-up in the process.

But he has struggled with injuries and form, taking 26 and 20 first-class wickets in 2011 and 2012 respectively and has not featured for Essex since April.

"During pre-season he was outstanding and was probably the best bowler on show," added Grayson.

"But unfortunately for Maurice he has not been able to transfer that into match performances. He's frustrated. We're frustrated by that.

"He's had some excellent coaching and has been across with the Lions as well. There comes a time when the player has to take full responsibility of their development.

"It's got to be a mental thing. There's no pressure from us. But it's a pressurised job. He still might have a chance to step into the team at some stage."