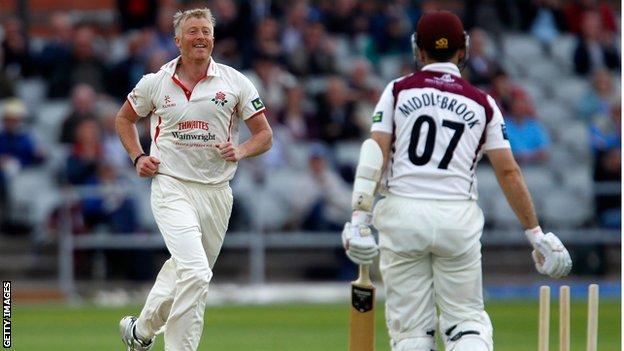 Northamptonshire chief executive David Smith has said his side's Division Two clash against Lancashire is being ruined by the Old Trafford pitch.

and no batsman in either side made 40 in the first innings.

"Was this a good wicket? Was it a fair contest between bat and ball? No," Smith told BBC Radio Northampton.

"This should have been a showcase Division Two game between the top two teams and it was not allowed to be."

David Smith's comments on the Old Trafford pitch have livened things up off the field while his players battle on against the odds. The Northants chief executive told BBC Radio Northampton "the pitch looked underprepared and the scorecard supports this view". But ECB pitch inspector Jack Birkenshaw has confirmed he will take no action over the pitch, saying consistent bowling and poor batting has contributed to the state of the match, which could well be completed inside two days.

Lancashire have been in superb bowling form, with Glen Chapple and Kyle Hogg carrying on from their demolition of Essex last week, by taking all 10 first-innings Northants wickets between them.

But the home side also struggled with the bat, reaching 159 - Tom Smith top-scoring with 35 - and a result is plausible on the second day of the clash between the division's top two sides.

"I think there is a problem with the pitch," said 56-year-old Smith, who played 197 first-class games for Warwickshire during his playing career.

"Was it the type of wicket I'd have expected to see at a Test ground? No, it wasn't.

"What level of preparation went into this wicket - we can only guess, but it looked underprepared and the scorecard supports this view.

"It's a scheduled four-day game. Is this type of wicket in the best interests of our game? No, it was not.

"The ball did swing, we accept that, but it's the movement off the seam when the ball hit the pitch that caused so many problems. This was not a good cricket pitch."