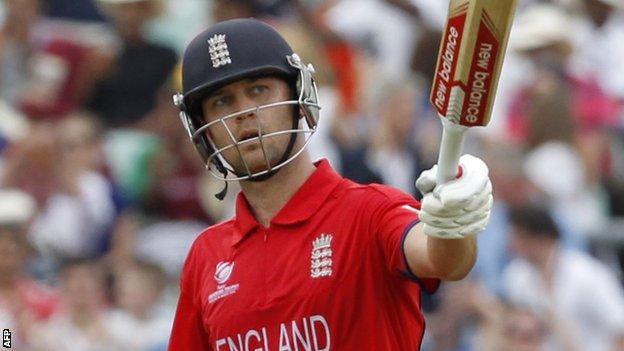 Jonathan Trott hopes England's progress to Sunday's ICC Champions Trophy final with India shows they are beginning to peak going into the Ashes.

After an inconsistent group stage, England bowled out semi-final opponents South Africa for 175 on their way to a dominant seven-wicket victory.

"I hope we are peaking," the 32-year-old batsman said. "There's a lot of cricket left this summer, and I hope it will be a great one for England."

The Ashes series starts on 10 July.

England began their Champions Trophy campaign with an impressive 48-run win against upcoming Test opponents Australia, before a seven-wicket defeat by a Kumar Sangakkara-inspired Sri Lanka put their knockout stage qualification hopes in the balance.

A tense rain-affected 10-run win against New Zealand followed in their final Group A fixture, with South Africa then being comprehensively beaten in the last four.

"It's been a fantastic tournament [for England], with regards to coming back from a loss against Sri Lanka," Trott reflected.

"We had the high of beating Australia first up, and then the game against New Zealand - a tight one in the end, but I thought we played really well - and to beat South Africa at The Oval was a great performance."

With the first of two back-to-back Ashes Test series against Australia beginning at Trent Bridge in less than a month, Warwickshire batsman Trott said a win in the Champions Trophy decider at Edgbaston - his home ground - would be the ideal preparation.

He told BBC Radio 5 live: "It would be sort of having your cake and eating it. It is an amazing opportunity to play five games and win a Champions Trophy.

"We deserve to be in the final. We have played some good cricket, under pressure as well. India are a fantastic team, so we have to play our A-game."

England toured India in the winter, sealing their first Test series victory there in 27 years.

But in the last two one-day series between the sides, both in India, the hosts have won 5-0 and 3-2.