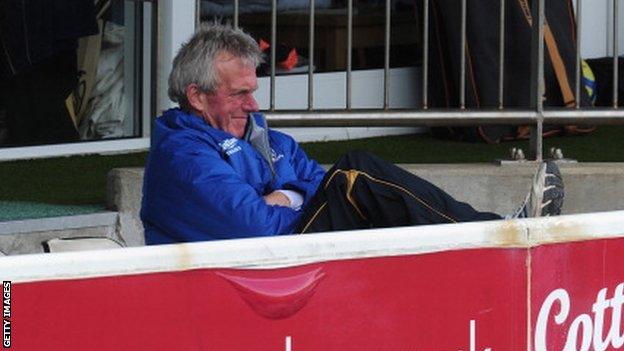 Cook, 61, was described as being in a "critical but stable" condition and the team have carried on preparing for Saturday's YB40 game against Hampshire.

"We had a good discussion, putting things into context and perspective.

"It's a case of trying to get on with the task in hand," batsman Mark Stoneman told BBC Newcastle.

Second XI coach Lewis, 43, will work with the first team on an interim basis, assisted by Allan Walker and Dale Benkenstein, the team's limited-overs captain.

Cook's illness has shocked the Durham squad, several of whom are homegrown.

Stoneman, 25, has worked with Cook throughout his professional career.

"I remember playing age group cricket and Geoff would be around. I've known him from being a 12-13 year old coming up through the ranks, so he's a massive part of my life really," he said.

After a lengthy career with Northants, during which he won seven Test caps for England, Cook joined Durham initially as a player in the minor counties era and oversaw their progression to first-class status in 1992.

He was coach when they won the Friends Provident Trophy in 2007, which was followed by County Championship triumphs in the following two seasons.