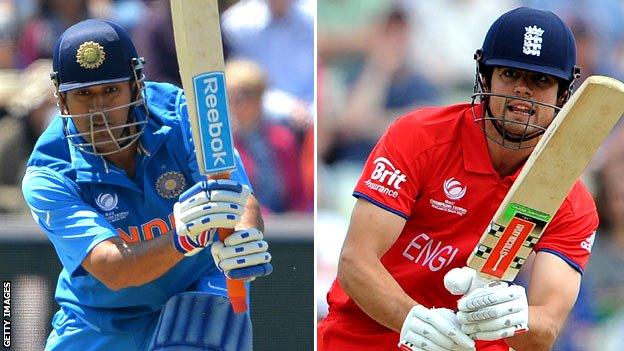 England will start as underdogs when they take on an unbeaten India side in the final of the Champions Trophy at Edgbaston on Sunday.

The hosts are hoping to secure their first global 50-over title, while India will want to back up their 2011 World Cup triumph and cement their status as the best one-day side on the planet.

Route to the final

England made a strong start to the tournament by beating an off-colour Australia by 48 runs but slipped up in their second group game as they lost by seven wickets to a Kumar Sangakkara-inspired Sri Lanka.

A tense 10-run victory over New Zealand in Cardiff saw them through to the semi-finals, where they steamrolled South Africa by seven wickets with their best all-round performance of the tournament.

India have cruised into the final, making the highest score of the tournament - 331-7 - in a 26-run victory over South Africa, and following up with eight-wicket triumphs over West Indies,Pakistan and Sri Lanka.

Explosive opener Shikhar Dhawan has scored 332 runs at an average of 110.66, while a richly varied bowling attack has taken at least eight wickets in every match.

England's determination to lay down solid platforms by eschewing risk in the first 30 overs has been largely successful with Jonathan Trott and Alastair Cook both passing 50 twice and Ian Bell posting 91 against the Aussies.

The middle-order dashers have struggled, however, with Eoin Morgan and Jos Buttler scoring just 66 runs in seven innings between them as England failed to truly capitalise on good starts in the group stage.

With the ball, England have been superbly led by James Anderson, who has 10 wickets, while economical off-spinner James Tredwell produced a man-of-the-match haul of 3-19 against South Africa.

The decision to bring in all-rounder Ravi Bopara at the expense of a fourth seamer has paid off, with the Essex man adding quick runs against Australia and Sri Lanka and chipping in with three wickets at a superior economy rate (5.60) than frontline bowlers Steven Finn and Tim Bresnan.

With a team featuring only three members of the 2011 World Cup-winning side, Duncan Fletcher's rejuvenated India have been athletic and adventurous.

They have fielded the same XI in all four matches, with Dhawan dovetailing perfectly with the more composed Rohit Sharma at the top of the order and Virat Kohli and Dinesh Karthik also finding form with the bat.

In the bowling department, tall paceman Ishant Sharma, swing bowler Bhuvneshwar Kumar and spinners Ravichanchandran Ashwin and Ravindra Jadeja have all enjoyed success, with 30 wickets between them in four matches.

Perhaps ominously for England, India's progress has been so serene that MS Dhoni's late-innings fireworks have yet to be required, although the captain and wicketkeeper did show off his versatility by sending down four tidy overs of medium pace against the Sri Lankans.

"If we put the South Africa game down as something of a freak result - the Proteas clearly felt the pressure of being in a semi-final and were missing some key players - England have been rather clinging to the tournament by their fingernails because they haven't generally posted enough runs with the bat.

"They have been indebted to their bowlers, who have managed to restrict the opposition, with the exception of the Sri Lanka game when Kumar Sangakkara played so well.

"I was a bit worried about him in the one-dayers against New Zealand when he made a couple a basic errors, but he does catch well and has produced some outstanding pieces of keeping in this tournament.

"India, meanwhile, are the team of the tournament. They have looked very motivated, fielded brilliantly and have run through the wickets very hard.

"Without the shadow of Sachin Tendulkar, they are a young, fresh team with some very talented players in it.

"Dhawan and Kohli are top-class batsman and they have the unorthodox Dhoni, who can come in and do strange but very damaging things down the order.

"Their bowling has been good in all departments and I don't really see a weakness in their side.

"Anyone can win a final, but whether England are good enough to beat India remains to be seen."