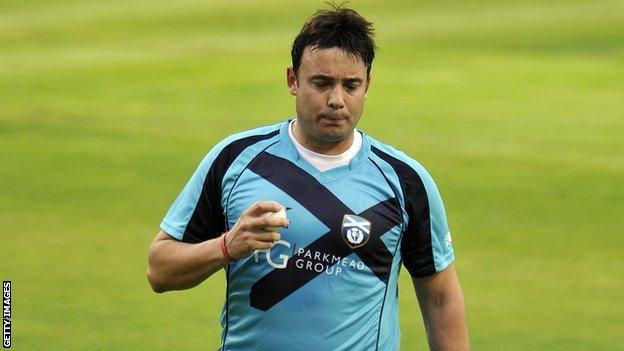 Scotland picked up their first point of the YB40 after their visit to Derbyshire was washed out.

Less than 10 overs were bowled before a downpour halted play with Derbyshire 36 for the loss of openers Chesney Hughes and Wes Durston.

The umpires waited until just before 20:00 BST to call the game off, with no sign of the weather improving.

For the hosts, it was a third successive fixture in the competition to fall victim to the weather.

The Scots had lost all seven of their previous YB40 encounters and, after winning the toss, the hosts were put in to bat.

Neil Carter beat Hughes three times in an excellent opening over, which was a maiden.

But Hughes responded by pulling Gordon Goudie over deep square leg for six in the next over and also drove the seamer past mid-off for another boundary.

Hughes then failed to beat Richie Berrington's direct hit and was run out for 30 from 30 balls.

Shivnarine Chanderpaul made two runs before the rain arrived just after 17:20 and, with the whole square under covers almost three hours later, another no result at Derby was inevitable.