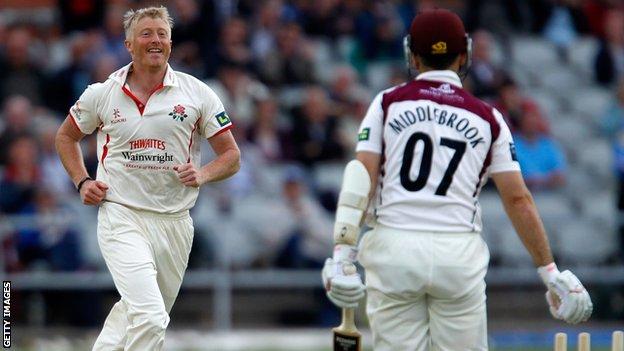 Lancashire beat Northants by eight wickets inside two days after a row over the state of Old Trafford's pitch.

Northants chief executive David Smith was unhappy with the surface, but an England & Wales Cricket Board pitch inspector said it was fit for play.

The visitors followed their first innings 62 with 169, leaving the hosts needing only 73 to seal the victory.

Second-placed Lancashire's win cuts the gap at the top of the table to leaders Northants, who have played a game more, to 17 points.

Luis Reece (22 not out) and Ashwell Prince (38) shared 70 for the second wicket after Luke Procter fell to David Willey (1-10) in the first over of Lancashire's second innings, before Prince was dismissed just two runs short of the victory target.

But Simon Katich joined Reece, who hit the winning runs in the final hour of play on the second evening.

Procter had earlier taken 4-39 as Lancashire skittled the visitors for 169, a score only made respectable by an eighth-wicket stand of 89 between Andrew Hall (55) and David Murphy (50).

It capped an incredible two days, which saw 32 wickets fall and an argument break out over the playing surface.

Smith claimed there was "a problem with the pitch", despite ECB pitch inspector Jack Birkenshaw stating he was satisfied it was fit for play.

"Was this a good wicket? Was it a fair contest between bat and ball? No," Smith told BBC Radio Northampton.

"This should have been a showcase Division Two game between the top two teams and it was not allowed to be."

"Jack Birkenshaw on behalf of the ECB has been here and in his opinion it has been a swinging ball, climatic conditions, poor batting that has attributed to the wickets and he has gone away reasonably satisfied.

"There has been nothing excessive from the pitch. Whatever people's opinion that's what it will be and we'll meet up with them again in a couple of weeks.

"There is no green on the wickets, its just over head conditions and its not just Northants who have been on the end of Glen Chapple and Kyle Hogg in recent weeks."

"Northants' players admitted they were not good enough on the two days of this enthralling game, but did suggest the Old Trafford has been underprepared.

"There is no hint from either chief executive David Smith or any of the Northants playing staff that Lancashire had conspired to deliberately prepare a below par pitch, which was cleared by ECB pitch inspector Jack Birkenshaw and defended by Lancashire.

"But when the two sides meet again in a fortnight's time, the atmosphere in the committee room at Wantage Road may be intriguing."