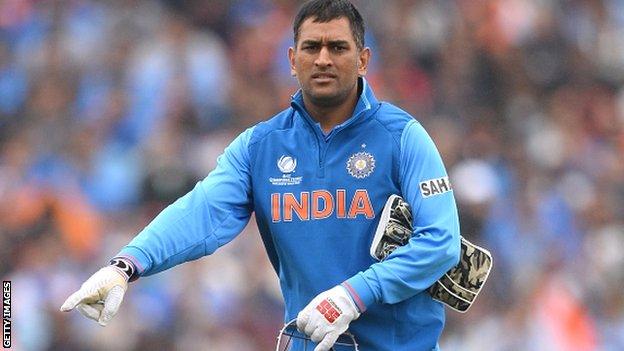 Unbeaten India reached the final with an eight-wicket win over Sri Lanka, who beat England in the group stages.

But Dhoni said of Alastair Cook's team: "I think they are a very good side, like every side in the tournament.

"This means all of them are strong enough to beat anyone on that particular day and win the trophy."

The most recent meeting between the teams was a five-match series in India in January which the home side won 3-2.

"England are a very good side. We have played quite often in the last couple of years so we know the same amount about them and they know the same about us," Dhoni observed.

India's opening batsmen Rohit Sharma and Shikhar Dhawan have been in prolific form during the Champions Trophy, averaging 90 for the first wicket after partnerships of 127 v South Africa, 101 v West Indies, 58 v Pakistan and 77 against Sri Lanka.

Having restricted the Sri Lankans to 181-8 in the semi-final on an overcast day in Cardiff, Dhoni's team then reached their target with 15 overs remaining, Dhawan adding 68 to his two centuries earlier in the event, and Virat Kohli adding a fluent unbeaten 58.

"I think it is a well-written script, started well by the bowlers," Dhoni said.

"It was a good toss to win, but unfortunately for Sri Lanka they lost [Tillakaratne] Dilshan. We capitalised on that, then the bowlers bowled well - especially the spinners.

"I think it's always important to have good bowlers in your side.

"The bowlers have done really well but still there are a few areas we would like to improve and hopefully the bowlers will take up the responsibility in that area as well."