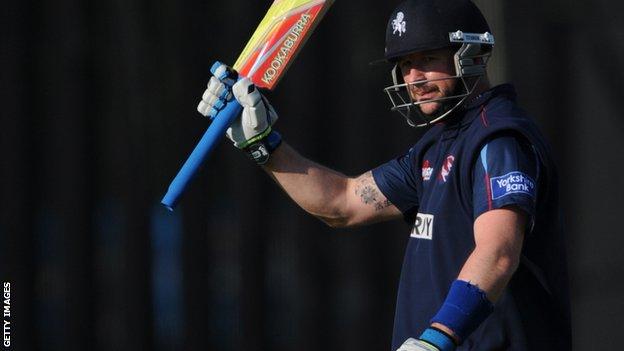 Darren Stevens has described an incredible record-breaking innings against Sussex as the highlight of his Kent career.

The Spitfires clinched an amazing YB40 victory by chasing down 336 - a world record for the 40-over game.

And Stevens' century from only 44 balls is the joint-fastest 40-over hundred in Kent's history.

"To me that's top of the list. The boys are so happy, it was a fantastic feeling," he told BBC Radio Kent.

"It was just a great game. Sussex played really well and got to an unbelievable target.

"Our chat in the changing room was 'just go and play with freedom, have fun and a bit of banter and see where we are in the last over' - and we didn't even get to the last over!"

Stevens, 37, a star of Kent's 2007 Twenty20 Cup triumph, has managed to turn his season around after a frustrating spell.

He equalled Mark Ealham's club record with his swift century and is back to full fitness following a number of injury problems.

"I was gutted I got off to not a great start early this season," said Stevens. "I had a couple of niggles, which was frustrating.

"But I worked hard on my form and have gone back to basics. I suppose the gods are with me at the moment. They're helping me along and I'm doing well.

"I'm really pleased with where I am at the moment with my game."

After Stevens eventually departed for 118, Kent were led to victory by Sam Northeast's 115 - the youngster's first one-day century.

"It was an absolutely memorable night," Northeast declared. "Most of the credit should go to Stevo - one of the best innings I've ever seen.

"To get a hundred off 44 balls is absolutely out of this world. To beat Sussex like that is just great.

"To be honest, the whole way through I didn't actually believe we were going to do it until Stevo came in and played that knock.

"He just kept hitting sixes for fun. It was an unbelievable innings."