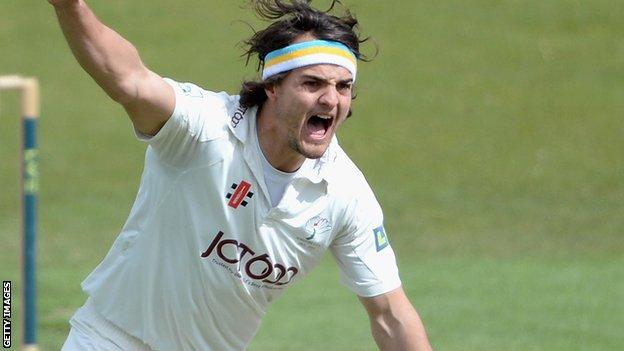 The Tykes have confirmed Jack Brooks has recovered from the broken thumb, which has kept him out for a month.

He was in fine form before his injury, taking 15 wickets for 16.80 in three Championship games.

The former Northamptonshire seamer tops the county's bowling averages while Patterson has 26 wickets at 22.81 in eight matches, Sidebottom has 17 at 22.84 in six, and Plunkett has 19 at 24.00 in five.

Batsman Gary Ballance, who has scored 534 championship runs for Yorkshire this season at an average of over 50, also returns after fully recovering from a virus.

Ballance, who has been selected by England for their NatWest T20 series against New Zealand starting on Tuesday, will play the first two days of the Surrey game before being replaced by batsman Jack Leaning.

Yorkshire go into the game leading the Championship, having thrashed fellow title contenders Middlesex by 10 wickets at Lord's in their previous match.

"We have been playing some excellent cricket, I couldn't ask more from the squad. We have a lot of confidence at the moment and everyone is playing disciplined cricket," said coach Jason Gillespie.

"We have to build momentum and continue to do the little things right. It would be nice to get another positive result against Surrey and go into the T20 break in a healthy position, but we face a tough task this week with Ricky Ponting and Kevin Pietersen in the Surrey side - two of the greatest batsmen in the world.

"Surrey have had changes off the field this week and we have to be aware of the wounded bull. They will be keen to bounce back. However we just need to maintain our discipline and momentum and we are a match for anybody."