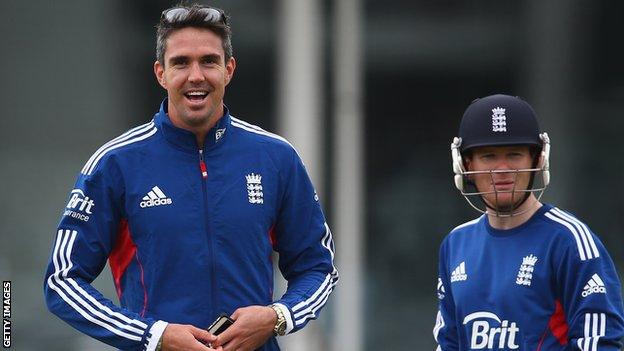 Kevin Pietersen will make his England return following a knee injury in the Twenty20 series against New Zealand.

The Surrey batsman, 32, will give England a pre-Ashes boost by playing in the second game of the two-match series, which begins on 25 June.

He will join the squad for the match on 27 June, if he comes through a county game against Yorkshire this week.

Both are yet to play for England.

Zimbabwe-born Ballance steps up from the England Lions having impressed on their limited-overs tour of Australia in February.

Warwickshire paceman Rankin, who stands 6ft 7in tall, is selected after switching allegiance to England, having played 37 one-day internationals and 15 Twenty20 matches for Ireland.

National selector Geoff Miller said: "We have selected a squad with plenty of T20 experience as well as young players new to the international game."

Regular Twenty20 skipper Stuart Broad is being rested ahead of the Ashes series.

Pietersen has not played since March but returns in a squad captained by Eoin Morgan for the two-match series, with both games to be played at the Oval.

His knee problem forced him to pull out of the third Test on the tour of New Zealand.

He missed the return series against the Kiwis and the current Champions Trophy tournament, in which England have reached the final, but will return for Surrey's County Championship game against Yorkshire this week.

The spotlight will be on his form and fitness ahead of the five-Test Ashes series, which starts at Trent Bridge on 10 July.

South African-born Pietersen is a key member of England's middle order having scored 7,499 runs at an average of 49.01 in 94 Test matches.

He has played in three winning Ashes series, scoring three hundreds and eight fifties against Australia, averaging 52.71 in 17 matches.

New Zealand spinner Daniel Vettori will miss the two Twenty20 matches because of an Achilles injury.

Injuries also rule Grant Elliott and Tim Southee out of the games.

*Pietersen will be available for the match on 27 June only.