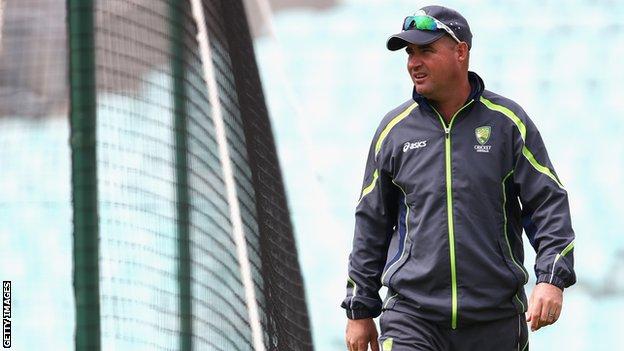 Australia coach Mickey Arthur says his side have the "best bowling attack in the world" and can put England under pressure in the Ashes.

He claimed that England have shown "cracks" in the past.

"They are a very good cricket side but I would like to see how they handle pressure for a sustained period of time," Arthur told Test Match Special.

"I honestly believe we can win the Ashes - we have the best all-round bowling attack in world cricket."

In an in-depth interview to be broadcast on BBC Radio 5 live sports extra during live coverage of Thursday's Champions Trophy semi-final between India and Sri Lanka, Arthur gives an insight into Australia's preparations.

In addition to suggesting that England may not cope under sustained pressure, South African Arthur described the reaction of the England and Wales Cricket Board (ECB) to David Warner's attack on Joe Root as "part and parcel" of the game, talked about the batting line-up which could start the first Test on 10 July, and discussed the likelihood of headline-grabbing spinner Fawad Ahmed being involved in the series.

Despite England being the bookmakers' favourites to retain the Ashes, Arthur is confident Australia can cause an upset with their bowling attack.

Peter Siddle is his most experienced bowler with 150 wickets in 41 Tests.

Spinner Nathan Lyon has taken 76 wickets in his 22 Tests, while James Pattinson, Ryan Harris and Mitchell Starc have 117 wickets between them in 31 appearances.

Arthur said: "I'm talking depth wise, if we pick up an injury we have got somebody who can rock up and be just as effective - I think that's a massive boost for us.

"If we play for each other and the badge, it will be extremely powerful. If our batsmen get enough runs, we have a really good chance in this Ashes series because I'm confident we will get 20 wickets."

Arthur also pinpointed last year's Test series against South Africa, which England lost 2-0 at home, as an example of the hosts' lack of resilience.

"When South Africa put them under pressure last year for extended periods of time we saw a couple of cracks develop," he said.

"That is going to be our challenge to put them under pressure for that period."

Arthur, who was appointed in 2011 as Australia's first foreign head coach, believes the reaction from the ECB towards Warner is something his side have to deal with.

Warner punched Root in the face in a Birmingham bar, an incident the ECB described as an "unprovoked physical attack".

The batsman was later fined and suspended by Cricket Australia until the start of the Ashes series.

"That's part and parcel of touring England," Arthur said. "You have to be very street smart and on your game. If you're not, the media and the ECB will have a field day with you.

"We have to be smarter and make sure we make the right decisions. Unfortunately some guys are learning the hard way but you hope they will get better for it."

Warner will not be allowed to play in Australia's warm-up games against Somerset and Worcestershire, but Arthur said: "He will be available for selection for the first Test.

"All we have to do is give him the best possible preparation based on what we've got.

"He's going to get as close to the best preparation he can have without playing a game, then we have to make that call after the game in Worcester."

Spinner Fawad has been named on the A tour to South Africa and Zimbabwe - which takes place at the same time as the Ashes - but could yet be called up according to Arthur.

"It is likely. We have a couple of spinners that we are mulling over," he said. "If the weather stays the same we may consider another spinner. There's been no clear-cut decision yet."