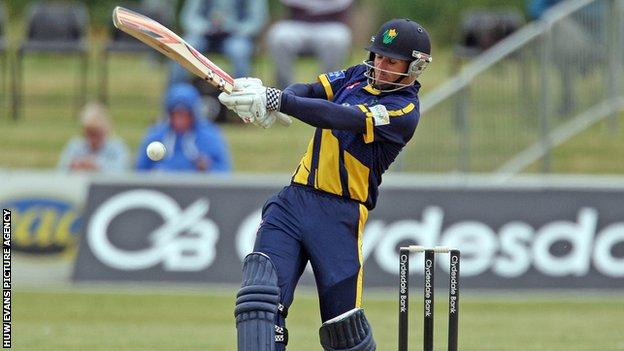 Glamorgan boosted their hopes of reaching the semi-finals of the Yorkshire Bank 40 with a 34-run victory over Leicestershire at Grace Road.

The Foxes lost their way after Josh Cobb and Niall O'Brien gave them a solid start with an opening stand of 60 in nine overs.

But they were bowled out for 231 with one ball of their innings remaining.

The win was Glamorgan's fourth of the season, and it saw them leapfrog the Foxes into third place in the Group C table while Leicestershire have lost three of the last four in the YB40.

Glamorgan made the perfect start with Will Bragg taking 17 runs off Nathan Buck's first over, including a six with a free hit following a no-ball. Wallace was also in good form reaching 50 off 42 balls with seven fours.

The Foxes finally made a breakthrough when Bragg, going for another big hit off Jigar Naik, was caught at long on for 33. Wallace continued to impress but was superbly caught at cover by Ned Eckersley off Naik for 61 off 54 balls.

Cooke kept the Glamorgan innings on track with 55 off 57 balls as the Foxes threatened to hit back. Left arm seamer Rob Taylor snapped up the wickets of Marcus North for 11, Murray Goodwin (41) and Dean Cosker (four) to finish with three for 57.

Buck after his nightmare first over removed Cooke and claimed two for 63 while Naik's two wickets cost him 39 runs.

The victory target looked well in the Foxes reach, but when Cobb was bowled by Jim Allenby for 35 they collapsed dramatically. Greg Smith was lbw to Allenby's next delivery and O'Brien caught behind off Hogan.

The Foxes lost three wickets in six balls without scoring a run and it became four wickets for 11 runs when Shiv Thakor was run out.

Joe Burns with 71 off 77 balls kept the Foxes hopes alive until driving a catch to cover off Graham Wagg. Michael Thornely (24) and Rob Taylor (22) hit some quick runs but in the end the home side fell well short.

BBC Radio Wales' Edward Bevan: "This was another comfortable win for Glamorgan which takes them into a challenging position near the top of the table.

"There were again positive contributions from the Glamorgan batsmen, Mark Wallace top scoring with 61 and he was well supported by Chris Cooke with 55 and Murray Goodwin's 41.

"Leicestershire then began well reaching 60 without loss before losing three wickets without addition and slumping to 70 for 4.

"There was an innings of 71 from Australian batsman Joe Burns but Leicestershire fell well short of target with Glamorgan winning by 34 runs."