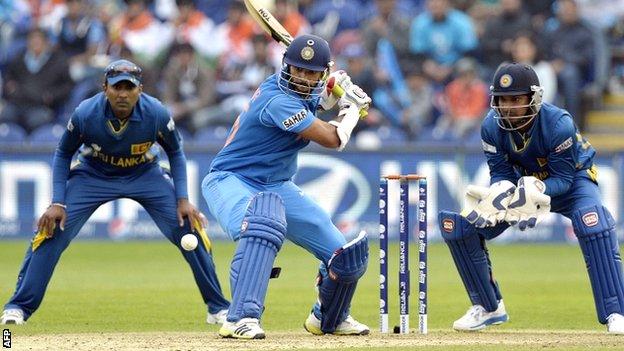 India thrashed Sri Lanka by eight wickets to set up a Champions Trophy final with England.

Chasing only 182 to win, India cantered home in 35 overs, with Shikhar Dhawan hitting 68 and Virat Kohli a sparkling unbeaten 58.

Earlier, Mahendra Dhoni's side took advantage of the damp conditions in Cardiff to reduce Sri Lanka to 41-3, effectively 41-4 after Tillakaratne Dilshan retired with a calf injury.

"It was a dominant display of quality cricket from India. They haven't dropped a single game in this tournament so far; they've been exceptional and clinical in every game. This is the stuff that champions are made of. This team is definitely in transition - they've lost about two and half thousand caps since the 2011 World Cup win but they have gone from strength to strength."

Angelo Mathews made 51 and Mahela Jayawardene 38 as Sri Lanka fought back, but India's spinners found turn to restrict Mathews' men to 181-8.

Any comfort that Sri Lanka could have taken from the difficult batting conditions was dismissed by Dhawan and Rohit Sharma, who shared 77 for the first wicket.

Then, when Rohit was needlessly bowled swiping at Mathews, Kohli arrived to take India to a date with the hosts at Edgbaston on Sunday.

England made the most of the help given to their pace bowlers in a similarly one-sided semi-final victory over South Africa on Wednesday, but if they were hoping for more of the same in Birmingham, India proved that they can adapt to traditional English conditions.

The most impressive side in the tournament to date, India had built their three previous victories on the prolific opening pair of Dhawan and Rohit, the spin of Ravi Jadeja and some lively fielding.

Here, their seam attack came to the fore, as Bhuvneshwar Kumar, Umesh Yadav and Ishant Sharma all found movement from the pitch to virtually eradicate run-scoring from the early part of Sri Lanka's innings.

Man of the match Ishant Sharma

"The conditions were really favourable today. The wicket was helpful for the fast bowlers so that paid off for us. Bounce and pace is my strength but Bhuvee (Bhuvneshwar Kumar) and Umesh (Yadav) bowled really well."

Recognising the assistance on offer, skipper Dhoni removed his wicketkeeping gloves and pads to become India's fourth seamer and even had Jayawardene given out lbw in his first over, only for an inside edge to be detected on review.

By that time, India had already ripped through the Sri Lanka top order, albeit if they were given the boost of the injury to Dilshan, who limped off with an injury sustained when playing Yadav through the on side.

In amongst Dilshan's exit, three left-handers - Kusal Perera, Lahiru Thirimanne and Kumar Sangakkara - all edged to the sharp Suresh Raina at second slip as Sri Lanka managed only 47 runs in the first 20 overs.

The slow rebuilding job was done by Jayawardene and Mathews, whose fourth-wicket stand of 78 was based on patient accumulation, bar Mathews' dance to smash Ishant over long on for six.

They were parted by Jadeja, the left-arm spinner skidding one through Jayawardene's pull shot, leaving Mathews to complete an 85-ball half-century scored almost exclusively on the leg side.

Both Mathews and Mendis fell late on trying to attack the impressive off-breaks of Ravichandran Ashwin, who in between turned one the other way to bamboozle Nuwan Kulasekara around his legs.

Sri Lanka had at least managed to bat out their overs, but any hope they had of making life difficult for India was undone by Rohit and Dhawan, whose strokeplay made the game look like it was being played in entirely different conditions.

Drops by Mathews and Sangakkara, both off Dhawan with Kulasekara the bowler on each occasion, did not help Sri Lanka's cause as the left-hander repeatedly blazed through the off side as well as lifting over third man for six.

Following the surprise dismissal of Rohit, Dhawan completed a half-century to add to the two hundreds he has already scored in the tournament before he was again put down, this time at point by substitute fielder Sachitra Senanayake, with Kulasekara the victim once more.

"I don't think Sri Lanka picked the right horses for this course; you needed seamers more than spinners. Even in these very typically English conditions, Indians have flourished, so hats off to the way they have played."

He eventually fell in lazy fashion, stumped dragging his foot to Mendis, leaving Kohli to accelerate to a half-century, victory and a place in the final.

"I think it is a well-written script, started well by the bowlers," said Dhoni. "It was a good toss to win, but unfortunately for Sri Lanka they lost Dilshan. We capitalised on that, then the bowlers bowled well - especially the spinners.

Opposing skipper Mathews agreed that the toss was crucial, saying: "If we had won the toss we would have bowled. It was seaming, swinging - the batters were finding it really hard.

"We didn't play well but credit should go the Indian bowlers - they bowled really well.

"All our younger guys need to take responsibility. We choked in the semi-finals but the credit should go to the whole team for the character they showed after we lost the first game."