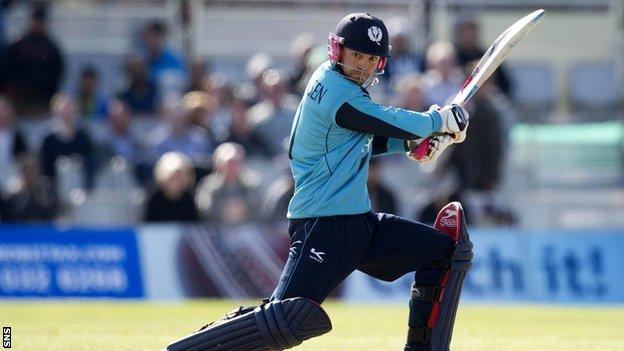 Scotland failed to make the most of a promising start as they suffered a seven wicket YB40 loss at Lancashire.

The Saltires, seeking a fourth consecutive win at Old Trafford, made 217 for 9, with Freddie Coleman hitting 63 and Calum MacLeod reaching 55.

However, the visitors could only find 27 runs from the final five overs, losing six wickets in the process.

Lancashire made routine work of chasing down the total, with Ashwell Prince 98 not out from 102 balls.

Although the Saltires' total was much improved on their 91 all out against Durham on Sunday, they should have pressed on from a good position, having reached 191 for three by the 36th over.

The Scots have now lost seven matches on the trot.

Opener Coleman top-scored with 63 off 70 balls, Calum MacLeod added 55 off 70 and captain Preston Mommsen chipped in with 46 off 38.

Coleman and MacLeod had put their side in a healthy position with a third-wicket partnership of 90 inside 17 overs to take the score from 57 for two in the 12th over to 147 for three in the 29th.

But Wayne White led the way for the Lightning with four for 38 from eight overs, including the wickets of Mommsen and Moneeb Iqbal in the space of five balls in the 38th over. Five of Scotland's wickets fell to catches off the top edge.

Prince and Stephen Moore then got Lancashire's reply off to a commanding start with an opening stand of 105 inside 17 overs, their highest of the season so far.

The pair hit off-spinner Majid Haq for straight sixes towards the new pavilion before leg-spinner Iqbal trapped Moore lbw for 53 and had captain Steven Croft caught at square-leg to leave the score at 117 for two in the 19th over.

Mommsen later took a stunning one-handed catch having turned to run towards the point boundary to help Haq get rid of Karl Brown (24) but Prince eased Lancashire home with 21 balls to spare.