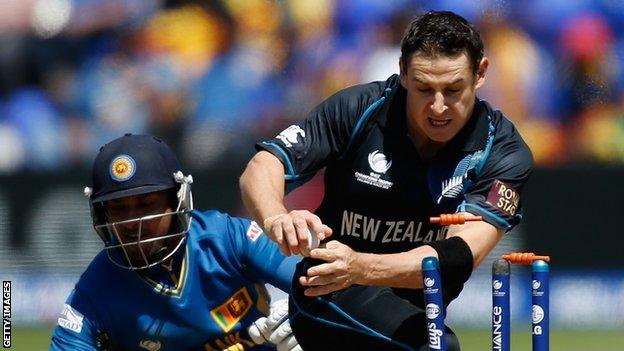 Nathan McCullum is setting his sights on helping Glamorgan to the finals day of the Friends Life T20 campaign.

The New Zealand international off-spin bowler has joined the Welsh county for the tournament after original signing, Australian Dirk Nannes, suffered an injury.

"I guess the finals are probably a realistic target and you never know what can happen," he said.

The pair were both in the New Zealand team knocked out of the ICC Champions' Trophy by England in Cardiff on Sunday, with Brendon captaining the team.

But Nathan McCullum, 32, says that bad experience at the Swalec Stadium did not put him off when Glamorgan approached him to stay on.

"It can be a spin friendly ground, so the way that we [New Zealand] performed and the way things went in the past couple of weeks, I had a few chats with Glamorgan and it all worked out for everyone to stay on for a month for the Twenty20," he said.

"Matthew Mott [Glamorgan's director of cricket] gave me a call and had a chat ... so it was good to talk to him and find out a little bit about what's going on there and where they're heading.

"So I'm excited to have the opportunity to jump in there and mix it in with those guys.

"Spin has come into T20 pretty well and it does play a big role depending on the ground size and ... Cardiff's a pretty big square so with a bit of luck ... hopefully the conditions will suit and we can exploit the big boundaries.

"It [spin] definitely makes a big impact and hopefully I can continue to do that for Glamorgan."