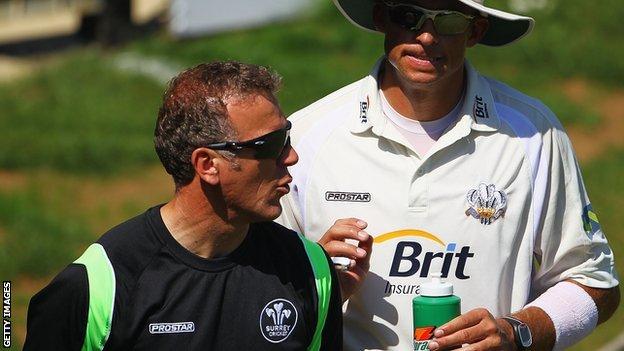 Yesterday was quite possibly the busiest day of my life.

The announcement of the coaching changes at Surrey on the day of the Australia-Sri Lanka Champions Trophy game at The Oval meant juggling meetings and phone calls with stints in the commentary box for Test Match Special.

It was an 18-hour rollercoaster and I must admit there will be a few more similar lengthy working days ahead for me.

Sport can be a ruthless business and both Chris Adams and Ian Salisbury have been thanked for their efforts over the last four and half years by Surrey as the club now looks to move things forward in a new direction.

My new role is to oversee professional cricket at the club. Due to my other working commitments, I will not be at every day of every match but I will be putting structures in place for the immediate future and beyond while our bowling coach Stuart Barnes will step up and run the side on a day-to-day basis.

With good communication and planning we're optimistic that this new-set up can help take the team forward while the club seeks a long-term successor to Chris.

The Champions Trophy has delivered two fascinating semi-finals this week, with England taking on South Africa at The Oval on Wednesday before India and Sri Lanka meet in Cardiff the following day.

Alastair Cook's men will have their work cut out to overcome a South Africa side who seem to be growing into the tournament.

Despite the loss of Graeme Smith, Jacques Kallis and Morne Morkel, they have stepped up to the mark, with Colin Ingram and David Miller showing against West Indies that they can be dangerous batsman at this level.

Dale Steyn's return to fitness has given them added potency with the ball at just the right time, alongside useful contributions from Chris Morris and Ryan McLaren.

England have reached the last four after sticking to a method that may have come in for a fair bit of criticism but has proved successful.

Much of the scrutiny has focused on the top three batsmen and their perceived reluctance to play high-risk cricket, but I am more concerned by the lack of runs from the middle order to date.

Ravi Bopara showed the way with his 13-ball 33 against Sri Lanka, but now is the time for Eoin Morgan and Jos Buttler to come to the party.

I think the new ball will be the key to deciding the outcome of this match. Can England's top order handle the pace and skill of Steyn? How will South Africa fare against Jimmy Anderson and Stuart Broad?

My heart says England, but my head says South Africa.

The all-Asian second semi-final is a repeat of the 2011 World Cup final and if it proves half as good a game as that was, the spectators in Cardiff will be in for a treat.

Sri Lanka have shown they are a dangerous team with good wins over England and Australia, but India are a level above any other side in this tournament and I fully expect them to go on and reach the final.

From numbers one to 11 they have played outstanding cricket. They are younger and hungrier than Indian sides of the past and their athletic fielding has added another dimension to their play.

They have the tournament's outstanding batsman in Shikhar Dhawan and a richly-varied bowling attack that blends the pace of Ishant Sharma and the swing of Bhuvneshwar Kumar with the exceptional spin axis of Ravichandran Ashwin and Ravindra Jadeja.

Sri Lanka will be looking to one of their proven match-winners - Kumar Sangakkara, Mahela Jayawardene or Lasith Malinga - to tilt things their way, but unless India have an off day, I can only see one winner.