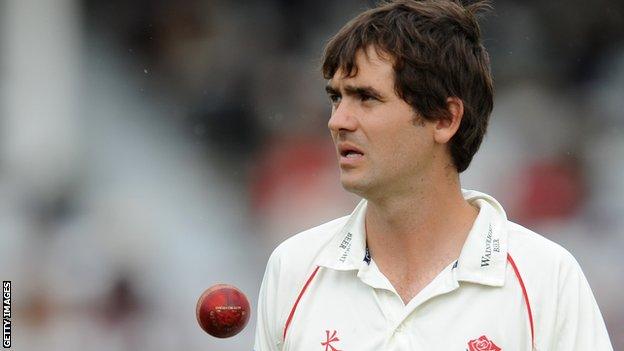 Lancashire followed their demolition of Essex by skittling Northants for just 62 on the opening day of their County Championship Division Two match.

Kyle Hogg recorded a career-best 7-27 and Glen Chapple (3-34) for Lancashire.

With Essex's last three first-innings wickets falling for five runs last week before they were dismissed for 20 second time around, Lancashire have now claimed their last 23 wickets for only 87 runs.

But the hosts did not fare much better, with Simon Katich's 30 the high point as they struggled to 121-8 before bad light halted play, a lead of 59.

It brought to an end a remarkable day at an overcast Old Trafford which saw 18 wickets fall in less than 80 overs.

It makes a positive result between Division Two's top two sides more than likely despite the bad weather predicted for days three and four.

Chapple, who put the visitors in, had started proceedings by dismissing Kyle Coetzer with only his fourth ball.

Hogg and Chapple continued their amazing form, accounting for all 10 of the Northants wickets to fall having managed the same feat against Essex the previous week, albeit with Chapple also claiming a run-out in that match.

Steven Crook top-scored for Northants with 16.

Having fallen to their lowest first-class score since 1995, the visitors' response was more of a team effort, with David Willey, Andrew Hall, Steven Crook and Azharullah taking two Lancashire wickets apiece.

"Like at Essex last week, Hogg and Chapple have bowled unchanged and dismissed two teams in successive games. The pair have taken 20 wickets between them for 57 runs in the last two innings.

"Northants' fightback with the ball was the mark of a team who have serious promotion credentials but a lead of 59 already looks vital.

"Wickets have fallen due to a combination of excellent bowling, some questionable batting and seam moving through the air and off the pitch."

"A phenomenal day's cricket was marred at the end, when umpires Paul Baldwin and Richard Illingworth were forced to take the players off for bad light despite the Old Trafford floodlights blazing out into the evening.

"They were quite right, because the regulations state the floodlights cannot replace natural light, only enhance it. Having said that, with 18 wickets in the day, both teams probably need a lie down by then.

"While Chapple and Hogg were magnificent, the fact that Northants are still in the game after their lowest first-class total for nearly 20 years is a massive tribute to their bowlers too."