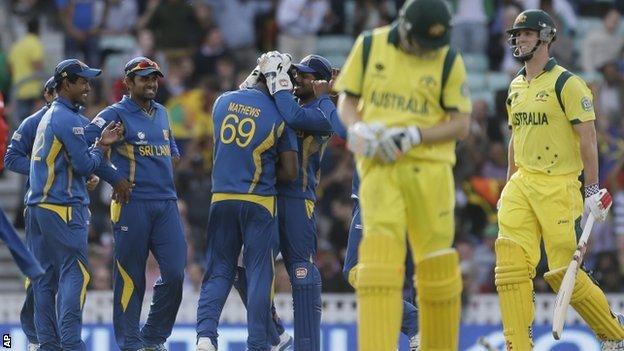 Sri Lanka progressed into the Champions Trophy semi-finals with victory over Australia, who failed in their 'mission improbable' at The Oval.

The holders had to win and reach the 254-run target set by their opponents inside only 29.1 overs in order to qualify, but it proved to be too great an ask.

After a good start, the run-rate dropped as they missed the first target before losing the match by 20 runs.

South Africa await Group A winners England in the last-four clash at The Oval on Wednesday.

Sri Lanka, who could have finished top of Group A had they bowled Australia out for 164 or less, will face India in Cardiff on Thursday.

"We are playing hard and passionate cricket. That has been the mantra of our success in the past and I hope it continues in the future also," said man-of-the-match Mahela Jayawardene.

"We look forward to another tough match in the semi-final."

Having lost their opening match to England and suffered a washout against New Zealand, Australia faced a big task even before a ball was bowled.

They won the toss and elected to field with the mindset of bowling out their opponents cheaply and achieving their target in quick time.

But Sri Lanka, who knew a victory without considering permutations would see them qualify, frustrated Australia with patient batting.

Sri Lanka's run-rate never rose above 5.00 after the fourth over, knowing they needed to play safe in order to set a competitive target for the Baggy Greens.

Only Dinesh Chandimal showed some urgency in the last few overs, smashing Clint McKay for six in the 44th over - the first and only six of the innings.

Jayawardene hung around from the 23rd over to the very end for his unbeaten 84.

It was a good if unremarkable innings, however the 36-year-old surpassed 11,000 runs in one-day cricket - only the eighth batsman to do so.

Lahiru Thirimanne was the only other batsman to make a half-century in the match, falling for 57 when Shane Watson caught his pull-shot at mid-wicket off the bowling of Mitchell Johnson. The Queensland paceman was the pick of the Australia bowlers, taking 3-48.

Australia lost an early wicket when opener Watson (five) was bowled by Nuwan Kulasekara, but that did not detract them from the task in hand as the run-rate leapt to more than 8.00, near what was required of them.

However, their plans were decimated as four wickets fell in quick succession to leave them on 80-5. The dismissal of stand-in captain George Bailey summed up the calamitous period when he was run-out in mid-jog unaware that Kulasekara's throw was about to hit his stumps.

Adam Voges (49) caused some frustration, but after he fell Sri Lanka must have thought victory was theirs.

But it appeared there might be one more twist, as the final-wicket pairing of McKay and Xavier Doherty stubbornly batted on knowing Australia could still win the match, although tournament progression was out of the question.

However, needing 20 runs to secure an unlikely victory, McKay looped Tillakaratne Dilshan's delivery back at him to the delight of bowler and the passionate Sri Lanka fans.

"It would have been nice to get over the line in the end," said Australia skipper Bailey.

"Our goal was to do it in 29 overs, but we never got going. But it was good to see the last two fight it out."