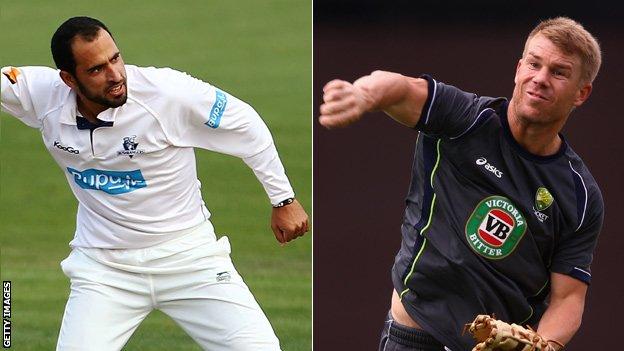 Fawad sought refuge in Australia three years ago claiming he was persecuted by the Taliban in his native Pakistan.

Cricket Australia hope the 31-year-old's passport application will be fast-tracked.

If we select him for the Test team and he plays, with his unusual circumstances the pressure on him will be extraordinary

Warner was suspended until the first Test and fined after punching England's Joe Root in a Birmingham bar.

An amendment to the Citizenship Act last week should enable Fawad to be granted a passport before the first test at Trent Bridge on 10 July and Inverarity has hinted the spinner is on course to receive a call-up.

"It is likely his passport will be through in time for him to be considered for the squad," Inverarity told Test Match Special.

"Then he will be considered for selection. He is a very interesting story.

"He is a young man who felt he was being persecuted in Pakistan and sought refuge in Australia. He came and joined an ethnic community there, played some cricket at a southern district level, was noticed as a good leg spinner, then he went down to state practice and it has gone from there.

Although he is yet to be awarded an Australian passport, Fawad has played for Australia A in their tour match against Ireland in Belfast.

Some have objected to the idea that a man born in another country could turn out in the baggy green during the showpiece series of the Australian calendar, but Inverarity has no such worries.

"The response has been overwhelmingly positive," Inverarity added. "It's important for our Australian community that there is that sort of integration."

However, Inverarity conceded it will be difficult for Fawad to displace Nathan Lyon, the only other spinner in the Australia squad, for the first of a five-Test Ashes series.

"If we select him for the Test team and he plays, with his unusual circumstances, the pressure on him will be extraordinary," said Inverarity.

"As a unit we need to protect him as much as we can from those distractions."

Inverarity also gave hope to David Warner that he could be recalled for the First Test.

The Australian selector dismissed concerns that a lack of cricket before 10 July would rule him out of the side.

When asked if Warner stood a chance, he replied: "Certainly. In cricket seasons gone by there have been wet starts to the County Championships and Sheffield Shield with little preparation, and players still play beautifully and make a century."