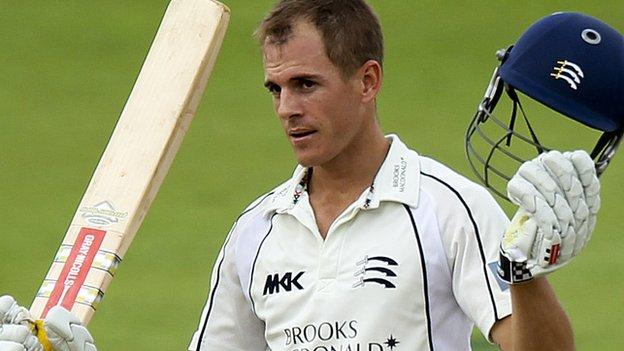 Middlesex skipper Neil Dexter is confident his side will bounce back from their defeat against Yorkshire.

Their 10-wicket loss at Lord's was the team's first in the Championship this season.

Dexter told BBC London 94.9: "Overall, we're in a good position. It's a wake-up call. We've got a lot to play for and the guys have a lot to prove.

"I'm sure that with the squad we have and the characters we have in the dressing room we'll bounce back."

Middlesex never recovered from a poor first innings, which saw them dismissed for 175 after Yorkshire made 390, and Dexter admitted it was the manner of their defeat which disappointed him most.

"We're pretty disappointed with the way we approached the whole game," he said.

"It is just one loss, but we're not happy with the way we lost. We didn't really show much fight.

"We have to reflect and see where we can improve individually.

"We've done well as a team, but individuals also need to put up their hands now. "

Dexter will take back the Middlesex captaincy for Championship games when Chris Rogers is on Ashes duty with Australia.

He had relinquished the role last year in order to focus on rediscovering his best form but believes he is now ready to skipper the team again.

"I figured out a few things in the past that I let get to me," he explained.

"I'm a lot more relaxed now as a person and as a player. I'm looking forward to the challenge that lies ahead."