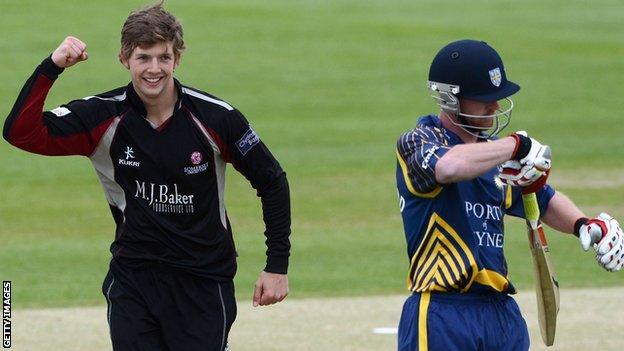 Somerset's Craig Meschede says his confidence has been boosted by his form in this season's YB40.

The medium-fast bowler is the leading wicket-taker in the competition with 20 after a career-best 4-5 in Sunday's victory over Leicestershire.

"I didn't play that much last year because of injury, so it's a massive confidence boost for myself.

"I've been working really hard to try and be consistent as I possibly can," the 21-year-old told BBC Somerset.

"It's a massive achievement for me and hopefully it will continue."

In Somerset's five-wicket win over the Foxes at Taunton, Meschede had Greg Smith caught at mid-wicket before he ripped through the middle order by dismissing Joe Burns, followed by Shiv Thakor and Rob Taylor with successive balls.

The result meant Somerset remained top of Group C ahead of a month-long break from the competition while the FL t20 group stages are played.

Meanwhile Meschede is hoping to carry his form into Championship cricket, in which he has yet to secure a regular place in the team.

He has failed to take a wicket in 32 overs in Division One this season and admits he has struggled to adapt his bowling style to the four-day format.

"One-day cricket is very unpredictable, a touch-and-go scenario all the time, whereas Championship cricket is more relaxed and more boring, in a way. You have to bowl six balls in the same area consistently.

"It's a tough mental challenge, but I'm getting there slowly. One-day cricket is my main focus at the moment but hopefully I can get back in to the Championship side and get a couple of wickets," he added.