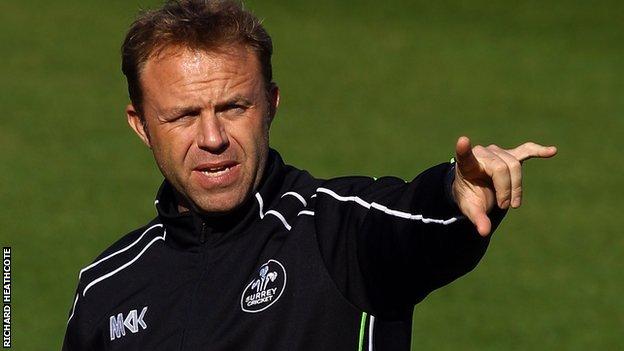 They will be at the helm for Friday's County Championship game with Yorkshire while the club search for a long-term successor to Adams, who ended his playing career to join Surrey in 2008.

"Chris Adams is someone I love talking to about cricket. I find him pretty straight on things. Of course he'll be sad to have departed this way, it's been a tough five years but I suspect it won't have come as a complete shock.

"I could say Surrey are the Manchester United of cricket, although their executive director Alec Stewart would take great offence and say more Chelsea. Either way they demand and not hope for success.

"It's a growing trend to sack a coach mid season and that can be attributed directly to two divisions and increased prize money. It's not a criticism, just a fact.

"Closely linked is the power players now have. The dressing room is increasingly influencing decisions.

"Winning Division One earns the players £351,493.85 to be shared. The second division is much lower at £87,873.46. Players not having the opportunity to win the top prize can be fatal for coaches.

"Money is nowhere near as big as football and the coaching roundabout will not reach those silly levels but expect one or two departures a summer."

Under him, the club won promotion and the CB40 in 2011, but are without a Championship win this term.

"Chris and Ian have worked really hard for the club and we appreciate their endeavours during the past five seasons," said Surrey chief executive Richard Gould.

"The club has decided it is now time to make a change in order to progress further."

Although it is uncommon for managerial staff to leave counties mid-season, Adams' departure is by no means unique.

Last summer Northants parted company with head coach David Capel, ending his 33-year association with the club, and in July 2007 Richard Pybus left Middlesex at his own request, less than six months after being put in charge of the first team.

By asking former England captain Stewart, 50, to step into the breach, Surrey are looking to ensure dressing room stability.

He is an executive director at the club, having spent his entire playing career with Surrey before retiring in 2003.

Stewart, whose father Micky also played for the county, made his Surrey debut at the age of 18 and went on to represent them for 22 years. During his domestic and international career he scored nearly 35,000 first-class runs.

He will oversee professional cricket at Surrey until the end of the season, while 42-year-old Barnes, who was appointed last October after leaving Gloucestershire, where he had been on the coaching staff for 15 years, will look after the team on a day-to-day basis.

"The club felt it was best to make this decision to help the club move in the direction they wish to move in," Stewart told Test Match Special.

"The club have made a tough decision. It's never nice to tell people they are no longer employed but sport is tough and you have to make some tough decisions and hopefully some right decisions."

Reacting to the news of Adams' departure, another ex-England captain Michael Vaughan posted on Twitter: "The first sign that cricket will become like football eventually.. A county coach sacked mid season."

Despite the devastating effect the news had on the club and Maynard's team-mates, Adams managed to rally the side and help them avoid relegation in their first season back in Division One.

Adams, whose contract was due to expire at the end of this summer, had put his faith in Rory Hamilton-Brown as skipper in 2010, but he was allowed to leave following the death of Maynard, a close friend.

Surrey's signing policy last winter was to go for experience over youth, bringing in South African Graeme Smith as captain and former Australia skipper Ricky Ponting along with Gary Keedy and Vikram Solanki.

However, their plans were disrupted when Smith hurt his ankle in early May, an injury that has ruled him out for the season.

They drew their first two Championship matches with Smith in the side, but lost the two immediately after his injury, although they have drawn three games since.

Their one-day form has also been poor and they currently lie sixth out of seven in their YB40 group with two wins from seven matches.

Gould said they were in no hurry to appoint successors to Adams and Salisbury, but were still hopeful that this season could be a positive one for the team.

"We have particular ambitions for this season and wanted to make sure we had enough time to make changes and then hopefully deliver on some of those ambitions," he told the Surrey website.

"We need to be able to attract the best calibre of person and we're not going to set ourselves a tight deadline for that.

"We're very fortunate to have Alec Stewart available to take over for the next few months and we'll be using the time that gives us to get the very best result for Surrey Cricket Club."