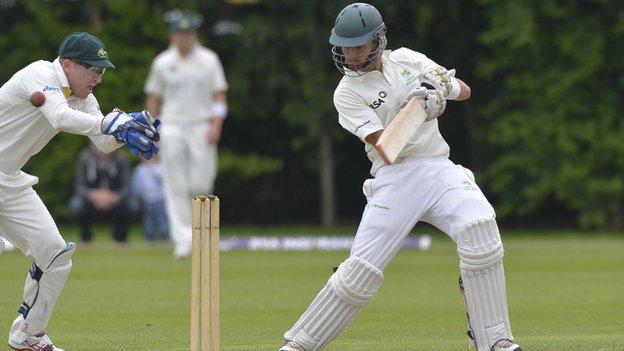 Ireland lost by 93 runs to Australia A in the rain-interrupted four-day match between the sides at Stormont.

The Irish began the final day's play on 51-3, needing a further 250 runs to win the game after the tourists had declared on 174-0 on Sunday.

The morning's play was wiped out because of a wet outfield but the home side lost wickets on a regular basis when play began after lunch on Monday.

Stuart Poynter top-scored for Ireland with 63, with James Shannon scoring 35.

Chasing a total of 302, the Irish reached 92 before losing their fourth wicket, Andrew White returning to the pavilion after scoring 23.

Shannon, John Mooney (0) and Kevin O'Brien (10) were then all dismissed in quick succession.

The home side reached 136-7 by tea and after another short rain delay, they progressed to 182 before losing Stuart Thompson for 27.

Trent Johnston went soon after for five and Stuart Poynter for 63, leaving Max Sorensen not out 0.

Moises Henriques was the pick of the Australian A bowlers with figures of 4-22, with Nathan Lyon taking 3-40.

Ireland had won the toss on Friday and Australia racked up a score of 312-9 declared after being put in to bat, Steve Smith top-scoring with 133 and Max Sorensen securing a five-wicket haul.

The Irish replied with 186-4 declared thanks mainly to a score of 115 by Paul Stirling, but Australia A responded with 174-0 declared, with Nick Maddinson hitting 113 off 51 balls.

Ireland are next in action in an Intercontinental Cup game against the Netherlands on 1 to 4 July.