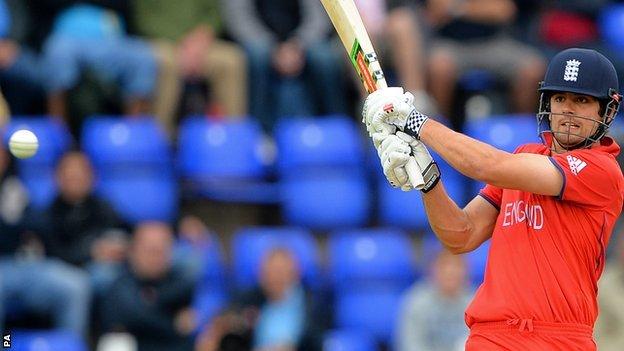 The hosts hung on to win by 10 runs at Cardiff, withstanding a late Kane Williamson-led charge to defend a total of 169 in a game reduced to 24 overs.

Rain threatened to wash out the match, which would have put England out unless Australia thrashed Sri Lanka on Monday.

"England played with more freedom than they have done in the past - they were freed from the shackles by the reduced overs. But they still put too much pressure on their top three batsmen. If they fall quickly at the top of the order, their innings falls flat. That is a worry for England."

"It was quite a stressful day - it was a nerve-wracking time," said Cook.

Cook, who made 64 off 47 balls before England lost their last seven wickets for 28 runs, continued: "It is important you strike early when you are defending and those first four overs were fantastic bowling by Jimmy Anderson and Stuart Broad.

"It was a very fine bowling performance. We were very good in the field today."

England, as likely Group A winners, are set to face South Africa in the first semi-final at The Oval on Wednesday.

"We don't mind who we play - we are just glad to be in there," added Cook.

"We had a quarter-final in one way today, and now we look forward to a semi-final, whoever that may be against."

Anderson's early removal of Luke Ronchi and Martin Guptill initiated New Zealand's slide to 62-5, although Williamson's resourceful 67 off 54 balls - in a sixth-wicket stand of 73 with debutant Corey Anderson - gave them hope.

"It was certainly achievable, but England bowled outstandingly well at the start of our innings and set us back," said McCullum.

"Kane and Corey gave us a real opportunity but we fell short in the end."

New Zealand will be knocked out unless Australia beat Sri Lanka on Monday by a margin narrow enough to ensure the Black Caps maintain their superior net run-rate.

McCullum added: "We'll be supporting Australia now, which is not something that we normally like to do.

"We would love Australia to play some excellent cricket tomorrow, but obviously not too good either.

"It's never nice when you leave destiny in someone else's hands. But we had our opportunity today and we missed out, so if we find ourselves out of the tournament we can't be upset."