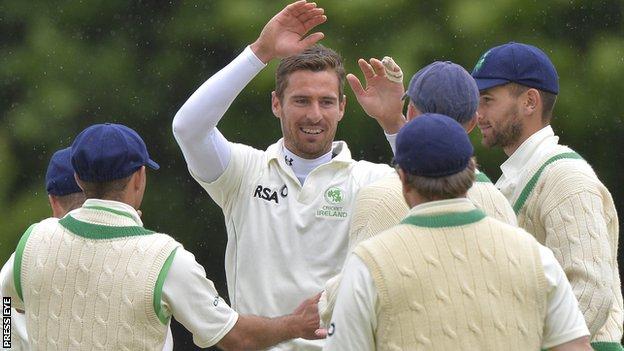 Max Sorensen secured a first five-wicket haul for Ireland as rain brought an early end to Saturday's play against Australia A at Stormont.

Australia resumed on 248-6 but just over an hour's action was possible with the tourists reaching 312-9.

Steve Smith made 133 in a partnership of 156 with James Pattinson (66), who was Sorensen's fifth victim in Belfast.

Trent Johnston took the other two wickets to fall, leaving him with match figures of 4-68.

Australian debutant Fawed Ahmed strode to the middle but before he could face a ball, the rain descended to bring play to a halt.

Sorensen's five wickets came at the expense of 50 runs in 16 overs and his performance was praised by new-ball partner Johnston.

"Max brings an extra dimension to our bowling attack - he has a good bit of pace, is fit and and will run in all day," said Johnston.

"So he is exactly was a captain wants and he has come on leaps and bounds.

"We did okay coming out this morning and getting the wickets we needed to."

The poor weather leaves just two days remaining for a result with not even an innings completed.

Australia were struggling at 139-6 on Friday before the seventh-wicket partnership between Smith and paceman Pattinson.

Play will start at 11:00 BST on Sunday morning at Stormont.