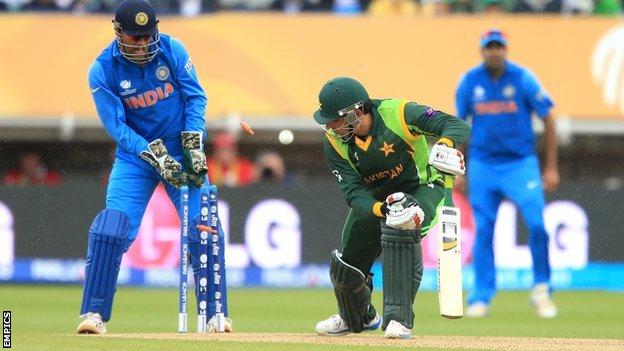 India underlined their Champions Trophy credentials and secured bragging rights over Pakistan with a comprehensive eight-wicket win in their dead-rubber clash at Edgbaston.

Already confirmed as winners of Group B and assured of a place in the semi-finals, India maintained their 100% record by chasing down a Duckworth-Lewis-revised target of 102 with 17 balls of their 22 overs to spare.

A woeful Pakistan, who exit the competition nursing three defeats in as many games, were bowled out for 165 inside 40 overs on a surface true enough for Shikhar Dhawan to make a dashing 48 off 40 balls in India's rain-interrupted chase.

"This young Indian team has surprised a lot of people including myself because they were not my pre-tournament favourites. You have to give the selectors a lot of credit for going with youth."

The weather, which caused four delays - the longest being for two-and-a-half hours - was the greatest threat to an India win that delighted the pale blue contingent in a boisterous yet good-natured sell-out crowd.

Victory was based on a disciplined bowling performance and a polished fielding display that is fast becoming the norm.

"We are the top fielding side in world cricket right now and we need to keep that intensity up."

India's opponents in the last four will be the Group A runners-up, which could be England depending on the outcome of their final round-robin game against New Zealand on Sunday and Australia's meeting with Sri Lanka on Monday.

Man of the match Bhuvneshwar Kumar claimed 2-19 from eight overs, one of four India bowlers to take two wickets as Pakistan lost their last seven for 55 runs. Not once in the tournament did they pass 170.

Although they were not helped by losing the toss, and rain lopping 10 overs off their innings when it was 19 overs old, any sympathy evaporated amid a clutch of rash shots.

"It was a disappointing performance again with the bat but the weather played its part and it was difficult with so many stoppages," said Pakistan captain Misbah-ul-Haq.

The first interruption did for Mohammad Hafeez, who was superbly taken by a diving Dhoni off Kumar, before Kamran Akmal was caught at leg slip via inside edge and Dhoni's pad as he aimed an ambitious drive at Ravichandran Ashwin.

Misbah and Shoaib Malik succumbed to the accurate Ravindra Jadeja either side of Asad Shafiq being taken down the leg side off Ishant Sharma for 41.

Wahab Riaz played on pushing forward at Ashwin, Saaed Ajmal drove Ishant to short extra-cover, and Junaid Khan and Mohammad Irfan were run out off successive balls, the latter almost comically when he set off in search of a single after driving the ball into the stumps at the non-striker's end.

In reply, Dhawan batted with the abandon which brought him centuries in the first two games, no matter that an initial target of 168 off 40 overs was reduced to 157 off 36 before the final rain interruption saw that revised once more.

Having seen Rohit Sharma clip Ajmal tamely to midwicket to end a fluent opening stand of 58, he cut Riaz to third man with 24 needed for a victory which had long since been secured.