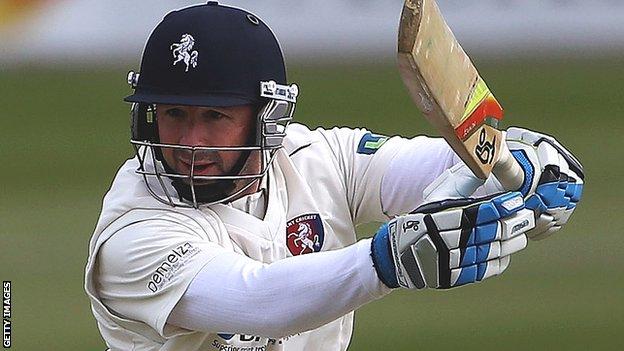 Darren Stevens scored a century as Kent battled their way to a draw against Glamorgan at Canterbury.

The hosts began the day on 254-4 with a lead of only 11 having followed on, but Stevens hit two sixes and 16 fours in his 119 to frustrate Glamorgan.

Ben Harmison (64) added 41 to his overnight score and Mitchell Claydon made 40, before the two captains shook hands with Kent on 489-9.

It was a second ton of the season for Stevens following his 136 against Essex in May.

Stevens and Harmison put on 163 for the fifth wicket to frustrate the visitors for the majority of the opening session.

But their impressive partnership came to a end following a spectacular piece of fielding and a direct hit by Michael Hogan.

Kent are next to bottom in the Division Two table and still without a four-day win this season, while Glamorgan are nine points further ahead in seventh.

"This was a character-building draw for Kent in a game they might easily have tumbled to a calamitous defeat in.

"Contributions throughout the team in their second innings underlined a solid and determined fightback following that first-innings skittling.

"There were half-centuries from Key, Nash and Harmison, but the highlight was Darren Stevens' second Championship century of the season.

"Stevens told BBC Radio Kent after the match that his celebration 'was more in relief than in celebration after being out in the 90s twice'.

"At one point Kent might have had the chance of pushing for a win, although it would have been unlikely that Glamorgan would have succumbed in the resulting run chase on a by now batting-friendly pitch."