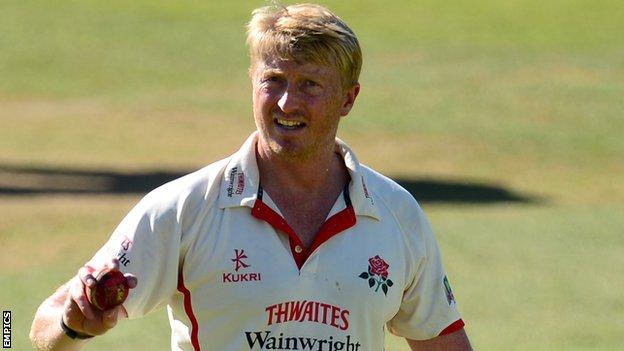 Lancashire captain Glen Chapple says bowling out Essex for 20 in the County Championship was "unbelievable".

The Red Rose ripped through Essex in their second innings with Chapple (5-9) and Kyle Hogg (4-11) starring.

"There is no way to describe that. Things don't happen like that, maybe once in 20 years," said Chapple.

"It's unbelievable really and in the context of the Championship it's a great win for us. It's something that sticks in the memory for a long time."

"We bowled well but you need the rub of the green and the pitch started to get a bit tired," added Chapple, who recently took his 900th first-class wicket.

"Things like that give you confidence but we just did the basics well."

The 39-year-old also ran out Essex captain James Foster after earlier hitting a half century as Lancashire totalled 398 to earn a lead of 125 at Chelmsford.

It took Chapple and 29-year-old Hogg just 66 minutes to skittle the Essex batting line-up as they posted their worst-ever score - the lowest in the County Championship since 1983.

"For all the bad days you have these are the days you remember throughout your career.

"2011 [winning the County Championship] was something special, but I think today, bowling a team out for 20, and you look at their batting line-up on probably one of the most batter-friendly pitches in the country, it's just a once in a lifetime thing that happened."