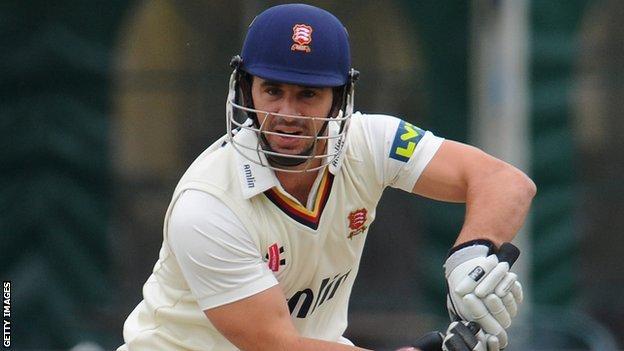 Essex all-rounder Ryan ten Doeschate hopes their score of 20 all out against Lancashire was a "freak" collapse.

They were dismissed in just 66 minutes for what was Essex's lowest first-class score.

"I don't think there's any panic. As bizarre as it sounds, most guys feel on top of their games," the Dutch limited-overs international told BBC Essex.

"Hopefully that was just a blip and a freak incident. It needs to get better and hopefully it will very quickly."

Having made 273 in their first innings, Essex conceded a sizeable lead as the Red Rose county replied with 398.

But there was nothing in the pitch to suggest they would be bowled out in less than 15 overs, with Jaik Mickleburgh's 10 the only score in double figures.

"We couldn't have foreseen that," said ten Doeschate, who fell lbw offering no stroke to Lancashire captain Glen Chapple, who finished with figures of 5-9.

"Apart from some good bowling by their two openers, it was not acceptable to bat like that.

"If you analyse it, there weren't a lot of bad shots, there were a lot of good balls flying around,

"I couldn't give you a reason for why it's happened apart from a good bowling spell."

Their current batting malaise was also reflected by the fact that it was the ninth time in 14 innings that five Essex wickets had fallen before reaching 100.

"We think we're strong, but realise there have been failures at the top of the order and that has to be remedied."