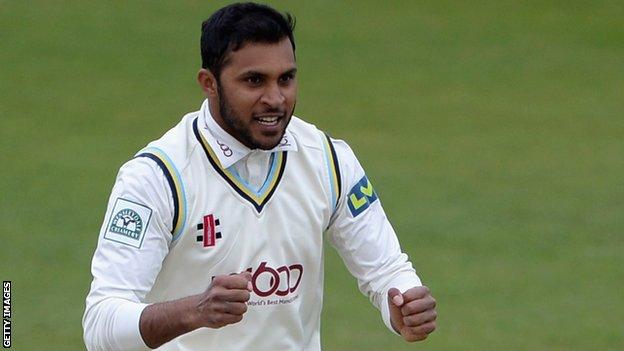 Yorkshire moved to the top of the County Championship with a 10-wicket victory over Middlesex at Lord's.

It left Yorkshire to score only five runs for victory and Adam Lyth ended the match with a boundary on 7-0.

The Tykes are now eight and a half points clear of Durham, whose dramatic victory over Warwickshire lifted them to second, and 17 clear of Sussex, who hjave a game in hand and are now the only remaining unbeaten side in Division One following Middlesex's first loss of the season.

The hosts, whose last defeat by Yorkshire at Lord's was in April 1987, had been on the back foot after a below-par first-innings score of 175.

That left them 215 runs behind, Yorkshire having totalled 390, thanks to centuries from Alex Lees and Andrew Gale, plus a useful 72 from in-form Rashid.

Having slipped to 137-4 on the third day, there was little sign of any genuine resistance on the final morning, as Richard Pyrah caught Simpson at silly mid-off off the bowling of Steven Patterson (2-40) and Dexter was bowled by Ryan Sidebottom (2-17).

Berg, who had top-scored in the first innings with 54, was defiant again but, once Rashid saw him off, Pyrah again taking the catch, the innings soon came to an end.

Middlesex then handed the new ball to Ollie Rayner and Joe Denly, who were shown plenty of respect before Lyth finally wrapped things up in the fourth over.