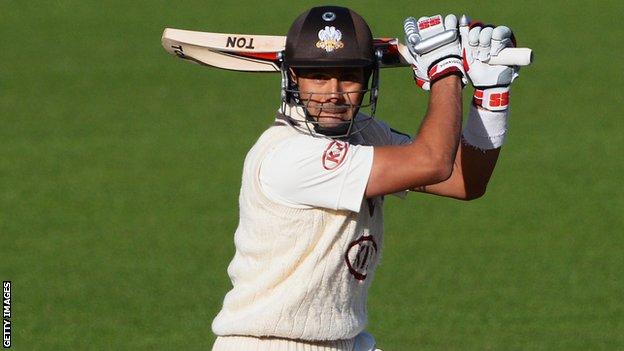 Acting skipper Vikram Solanki made his first Championship century for Surrey as they established a first-innings lead against Sussex at Arundel.

He hit two sixes and 15 fours in his 130 before being caught behind off spinner Monty Panesar, who took 3-90.

Solanki shared a fourth-wicket partnership of 177 with Zander de Bruyn, who reached 99 not out.

Surrey were 362-6 at the close, a lead of 67, with a draw the only feasible result on the final day.

Having bowled out the home side for 295, following a total wash-out on the opening day, Surrey were given a useful start by Rory Burns and Arun Harinath.

Chris Jordan eventually removed the latter for 23, then took a superb one-handed slip catch to send Burns on his way for 36 and give Panesar, back in the side following a shoulder problem, his first success.

Former Australia captain Ricky Ponting only managed 13 before edging compatriot Steve Magoffin into Jordan's safe hands, but Solanki and de Bruyn produced some excellent strokes to tilt the balance back in their side's favour.

Solanki's dismissal was quickly followed by those of Steven Davies and Gary Wilson, but Zafar Ansari kept de Bruyn company as the all-rounder tried to bring up his hundred, only to lose the strike in the day's final over.

"Odds on a draw at Arundel as Surrey lead by 68 with just one day remaining.

"In front of an excellent crowd on a glorious sunny day, Vikram Solanki provided rich entertainment, scoring a wonderful 130, with shots all around the wicket.

"Zander de Bruyn might have a sleepless night as he went to stumps on 99 having proved resolute support, but unless there is a dramatic turn of events Sussex will remain unbeaten after the first half of their Championship season."