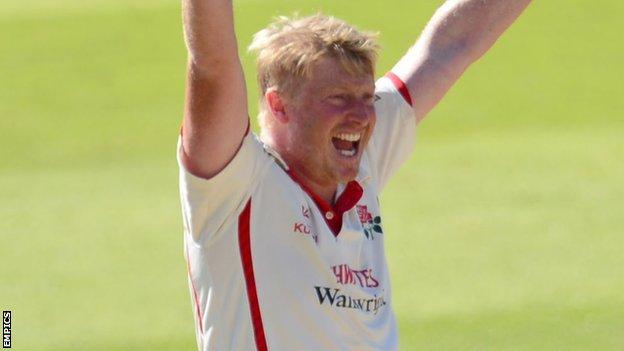 Lancashire captain Glen Chapple and fellow paceman Kyle Hogg destroyed Essex in 66 minutes at Chelmsford as they bowled out their hosts for just 20 to win by an innings and 105 runs.

Essex's worst first-class score is the lowest in county cricket since 1983.

But it was not the worst total on the ground, Essex having been the ones who bowled out Surrey for just 14 after tea that day at Chelmsford 30 years ago.

Having fallen short of their all-time lowest score, 30 against Yorkshire at Leyton in 1901 (when the great George Hirst took 7-12), it also brought back more recent painful memories for Essex.

When they lost to Lancashire in the 1996 NatWest Trophy final defeat, it was a young Chapple who took 6-18 to bowl them out for just 57.

After Australian Simon Katich had added just two runs to his overnight score to depart leg before to David Masters for 122, Lancashire were just four runs in front on 277-8.

But Hogg put on 69 for the ninth wicket with Chapple before being bowled by Masters (4-72).

And, although he went for 58, the visiting skipper was then involved in another half-century stand, 52 with last man Simon Kerrigan, who was finally caught behind off Reece Topley for 31, leaving Chapple stranded on 50.

Having earned a healthy enough lead, what happened next proved pure carnage as Essex never recovered from losing their first three wickets to Hogg with the score on 5.

While Essex captain James Foster was run out by his opposite number, 39-year-old Chapple, opener Jaik Mickleburgh scored half of the runs.

He top scored with 10, before being ninth out, adjudged leg before to Chapple, who then wrapped up the match next ball when he earned another lbw decision against Topley.

Lancashire's victory keeps them in second place in the County Championship Division Two table, 33 points adrift of leaders Northants, who they face at Old Trafford next Thursday.

"An astonishing day at Chelmsford. When Simon Katich went early for 122 Lancashire were four ahead with two first-innings wickets left, but incredibly the game was over by mid afternoon.

"Glen Chapple's partnerships with Kyle Hogg and Simon Kerrigan added a further 121 runs and served to wear Essex down.

"Tom Westley and Hamish Rutherford fell to loose drives to cover and Lancashire sensed their chance, bringing back memories of Surrey's famous collapse on this ground 30 years ago.

"It was brilliant new ball bowling and, just for once, there wasn't the usual tail end rally that often happens in this situation."

"It was a day that those inside the County Ground will not forget as under clear blue skies and sunshine, Lancashire showed their promotion credentials.

"The brilliant Glen Chapple and Kyle Hogg produced a stunning display of bowling as Essex crumbled in front of a disbelieving home crowd.

"None of it would have been possible with some superb batting in the morning as Hogg, Chapple and an excellent contribution from Simon Kerrigan knocked all hope of winning out of Essex."